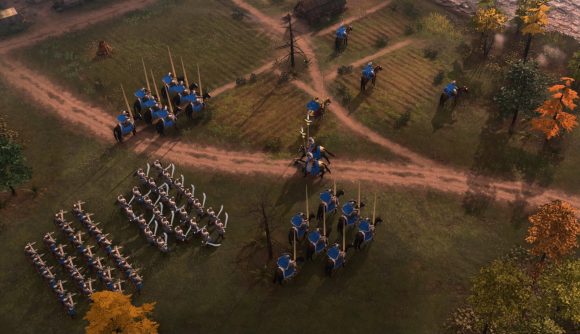 People play RTS games for different reasons, and in different ways – one person might like getting straight to the fighting, while another might prefer to grow their base, meticulously laying out castle walls and farms before heading off to war. The latest patch for Age of Empires IV caters to both playstyles by opening up the map size options for multiplayer matches.

Patch 14681 lets you pick out your map sizes for multiplayer games. You can select options to go up or down a size from the default now – so for instance, a 4v4 can be played on a large map, and 3v3 can be played on a medium-sized map.

The patch also changes the default map size for a couple quick match configurations, making for tighter (shorter) games. 2v2 matches will take place on small maps, 3v3 games on medium maps, and 4v4 matches will go down on large maps. However, you’ll still be able to use gigantic maps (or any other size map) in custom games – these adjustments only apply to quick match games.

The patch also makes adjustments to specific maps, and how spawns work on the Warring Islands map in cases of unevenly distributed teams. More trees spawn on Altai, the mountain ranges on French Pass are shorter, and the spawns for trading posts and sacred sites on the Danube River have been moved.

Patch 14681 is now live for #AgeofEmpiresIV. Check out the patch notes for full details and a glimpse of what's coming in Season Two.

You can read the full patch notes to see everything that’s changed in today’s update. The developers say to keep a weather eye out for the second seasonal event of Season 1, and features for season 2 are currently in the works.