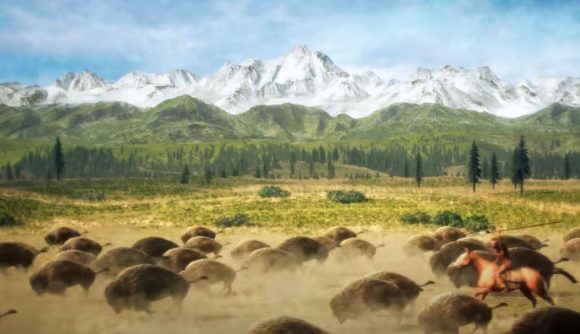 If you’ve checked out our recent Age of Empires 3: Definitive Edition interview, you’ll know that the devs behind the remaster have made changes to some of the classic RTS game’s mechanics to improve the depiction of Native American and First Nations civilisations in the game. One of these is to replace the civs’ mining with another resource, which developer World’s Edge has explained will be a “tribal marketplace”.

In an interview with Anthony Brave, lead cultural expert and consultant who “reviewed and then reported on Age III with attention to its depictions of Native American and Indigenous peoples” for the upcoming PC game’s remaster, both World’s Edge and Brave discuss the changes made to the civs’ mining mechanic. “Mining is pretty antithetical to Native values in general,” Brave, who is a Sicangu Oyate (Rosebud Sioux Tribe) and Chippewa-Cree descendant, explains. “We are taught to respect the land as our mother and be in good relations with it. Mining is a form of exploitation of the land, and we would never treat our mother like that.”

World’s Edge says that, in place of mining, the AoE3: DE will feature a “tribal marketplace”, which provides “an alternative method to gather coin” in the game.

In implementing this change, the studio adds, it “worked with top players in an early closed beta environment to ensure that it’s still fun and balanced”.

Following consultants’ feedback, World’s Edge also changed the original game’s ‘fire pit’ special building to a “community plaza” – a “building where villagers work together to create benefits for your civilisation” – and replaced the Native American and First Nations civs’ ‘Nature Friendship’ ability with “alternative abilities” to better represent the peoples in-game. These changes have additionally been put through balance testing, the studio says.

Age of Empires III: Definitive Edition players will also find that the Sioux and Iroquois civ names, which World’s Edge explains were “given to them by European settlers”, have been changed to their Indigenous names: Lakota (Sioux) and Haudenosaunee (Iroquois). Plus, the Shadow storyline (Act II of ‘The War Chiefs’ in the strategy game) has been re-written by Brave.

“The original story wrote Chayton as a Native guy who wasn’t really Native,” Brave says. “He knew nothing about Lakota culture, history, or his family; on top of that he was just incredibly naïve—to the degree that he was somehow shocked there was trouble between Native folks and settlers. Like, what timeline are you living in, bro?”

If you want to read more about these important changes, and the reasons and processes behind them, you can find the interview in full on the Age of Empires site here. The Age of Empires 3: Definitive Edition release date is October 15, so you won’t have long to wait to get stuck into the reimagined game.