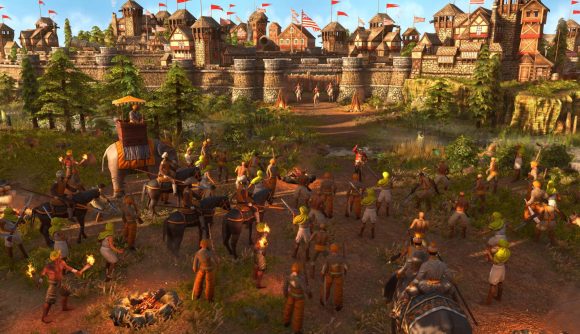 The upcoming Age of Empires 3: Definitive Edition won’t just add new civs Sweden and the Inca, and new game modes, such as Art of War missions to the classic RTS – it’ll feature a host of snazzy visual overhauls, too. We recently spoke to some of the strategy game’s devs about these, and one of the most exciting aspects of this is: “You can see the cliffs!”

That’s according to creative director at World’s Edge, Adam Isgreen, who tells us about how the devs approached remastering the game on a technical level in a recent Age of Empires 3: Definitive Edition interview. “This is going to sound funny, but one of the things I love most is that we fixed the cliffs! In Age III before, sometimes you could lose height with the terrain,” Isgreen explains. “It would just blend into each other.

“All the art has been redone to the point where you never lose a cliff any more, so you understand the height a lot better. For me that was a huge win. You can see the cliffs! It just makes a huge difference.”

In addition, Tantalus director of development Joss Ellis also gives us an idea of all the different things we can expect to see, visuals-wise, and what’s gone on under the bonnet to make the graphical changes possible. “Basically we looked at it and went, ‘Let’s just improve everything’,” he tells us, adding that, “Every single model and texture” in the RTS game’s impending remaster has “been remade”.

“This one’s got advanced shaders and it’s a modern engine,” Ellis says. “It’s got little tiny touches, like when the guys walk through the grass, they leave their footprints behind them.” Plus, underneath this, the dev explains that all of Age of Empires 3’s physics have been redone, along with its multiplayer and user interface. The UI will now have “a much more modern, floating feel” – and, like Isgreen, he highlights that players should be able to see more of what’s going on this time around: “You can see much more of the game”.

The Age of Empires 3: Definitive Edition release date is set for October 15, so it won’t be long before you can see all of this in-action for yourself.