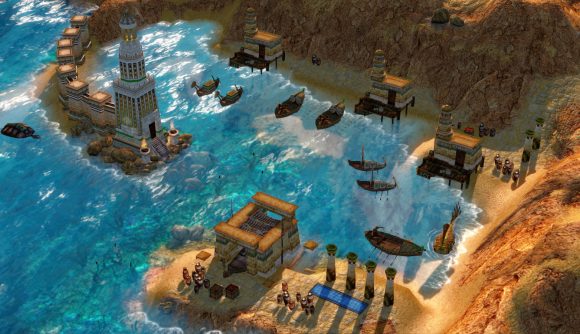 Age of Mythology has a new major patch out today. Update 2.8 brings with it a huge list of fixes and balancing changes, a new map, new cheat codes, and tons more. Not bad for an Age of Empires spin-off that’s now arguably almost 18 years old.

The last big update for Myth landed in December, and it was at the time “the only planned update for the game.” Nevertheless, the Age of Empires team has continued to work on improvements, bug fixes, and civilisation balance changes through this year. The changes range from adjusting Greek Myrmidons’ health from 110 to 120 all the way up to adding a new Wrath of Cyclone cheat that turns all of your units into titans.

There are four more new cheat codes, while we’re on the topic: Powers from Diyu grants four fandom god powers, Bless Me Fu Xi spawns all the heroes from the Tale of the Dragon expansion in your town center, Titanic allows titans to walk in water, and Wololo (classic Age of Empires callback) makes Chinese monks “wololo in joy when they convert enemy units,” according to the patch notes.

It’s a significant patch that also addresses connectivity and performance issues that were impacting multiplayer, so playing against players with lower-spec systems now should go much more smoothly.

The new map, Blue Lagoon, is available to play in the Random, Random All, and Random Land Map pools.

Last year, Age of Empires creative director Adam Isgreen said in an interview that his team was not going to “leave [Age of Mythology] behind” even as their focus shifted to the definitive editions for Age of Empires 2 and Age of Empires 3. He appears to have made good on that pledge.

You can read the full patch notes here. When you’ve had your fill, head over to our list of the best strategy games on PC for a bumper crop of terrific RTS titles.