Can you build an entirely AMD-powered gaming PC, using all the top Radeon and Ryzen components, into the super-cute, small form factor Cooler Master H100 chassis? Yes… and then also no. I mean, we managed to build a functional PC using an AMD Radeon RX 5700 XT and a 12-core, 24-thread Ryzen 9 3900X CPU using the new mini-ITX case, but there are definitely some compromises and caveats that we need to add in here. Probably mostly surrounding my use of the word: ‘functional.’

AMD’s resurgence has been well documented, with the advances it’s made in its processors, from the first-gen Ryzen chips to the mighty Zen 2 CPUs now starting to be matched by the 7nm Navi silicon that’s being jammed into its RX 5700-series graphics cards. Because we get all gooey over how cure mini-ITX motherboards are, and because ASRock has shipped us its impressive X570 mini-ITX board, we decided to try and build the most powerful all-AMD mini gaming rig we could.

Then Cooler Master released the H100 chassis, we got hold of one, thought it looked like something ripped from Portal, something you’d get super-attached to before having to brutally sacrifice it to GLaDOS, and decided that if we were going to build a teacup gaming PC it would have to be in that. Maybe that was our first mistake…

You see, the problem with the Radeon RX 5700 XT is that it’s a bit big. Not in some bloated Zotac triple-slot kinda way, but more in that it’s resolutely full-length and there’s no way that’s going to fit inside the Cooler Master H100 case. We tried, we really did, but nothing short of Dremel-ing the hell out of its aluminium frame would have it encapsulated inside the dinky innards of our chosen chassis.

But wait, you say, you intro’d the piece by saying you managed to build a functional PC using an RX 5700 XT and a 3900X using this case. What gives?

Well, that was arguably our second mistake… as you can see from the image below. 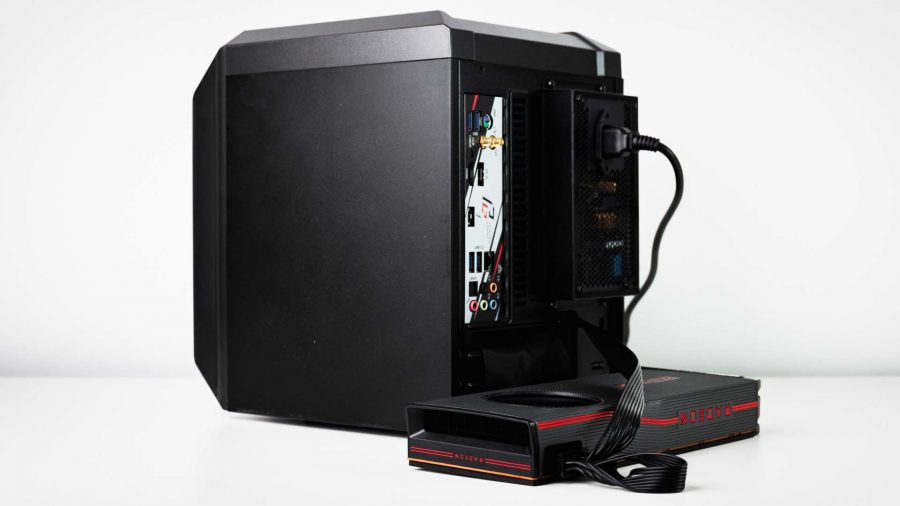 Yeah, it kinda had to spill out the back. Which wouldn’t have been a problem if it had worked fully. Unfortunately, while it was functional in that we could boot into Windows, for some reason the prolapsed machine we had created refused to acknowledge that there was an AMD graphics card actually installed into the build.

We’re not convinced that the ASRock X570 Phantom Gaming ITX/TB3 is particularly comfortable running a power-hungry GPU across a ribbon riser cable. Especially not one contorted to squeeze through a PCIe bracket slot on a tiny PC case.

So yeah, while we could supply juice to the RX 5700 XT via the PSU, and it happily outputted our Windows desktop – and was obviously better cooled than it would be had we been able to cram it into the H100… score one for Dave engineering – hardware acceleration, however, was sadly beyond us. 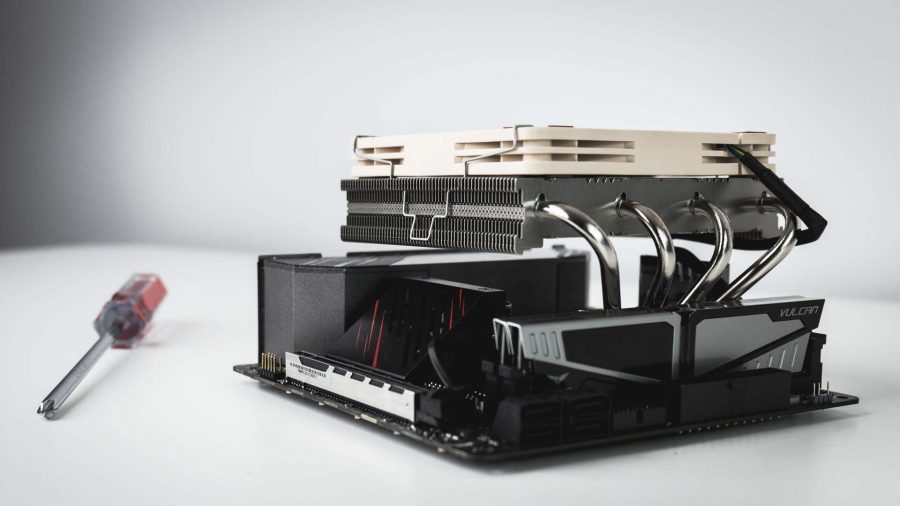 If you want a really powerful mini gaming machine of this size powered by AMD then you’re going to have to make one big compromise… use an Nvidia graphics card.

I’m aware that’s going to really upset r/Amd – possibly more than being unable to have their subreddit written out in all caps – but sadly while AMD has now announced its RX 5500-series graphics cards they’re only catering to the OEM crowd right now, ignoring DIY enthusiasts until some unspecified time later this year.

And at the moment it looks like they’re targeting the GTX 1650 in terms of gaming performance too. That doesn’t cut it for what we want in terms of frame rates, and with the RTX-series cards also being too long for the H100, that leaves the Nvidia GTX 1660 Ti, a GTX 1070-level card that can nail 1440p performance in the latest games. 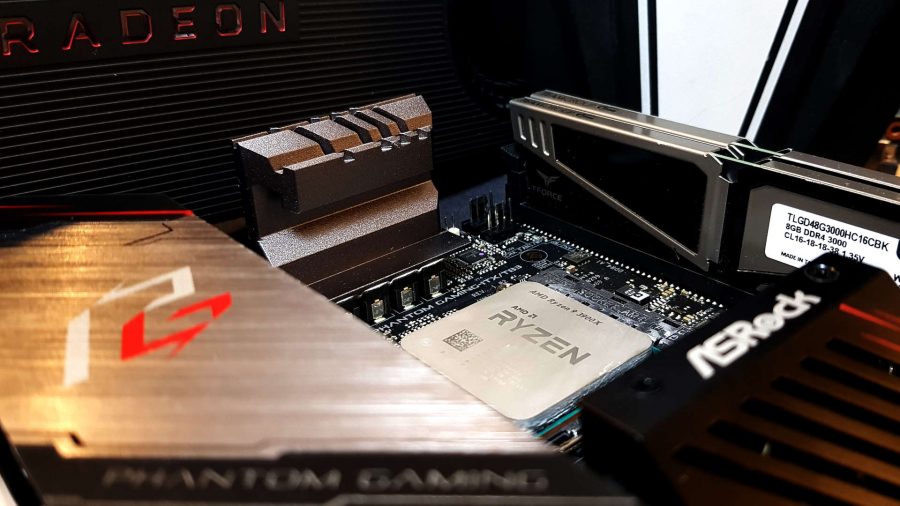 But the rest is all AMD. The base of the build is the powerful ASRock X570 Mini ITX board, the Phantom Gaming ITX TB3. It’s got all the X570 good stuff, such as PCIe 4.0 and the proper AGESA 1.0.0.3 ABBA BIOS too, for all your boosty frequency fun time. Underneath the board is space for an M.2 PCIe SSD – we’ve dropped the bargainous Addlink S70 in there – and jammed 16GB of memory into the board. Though we could probably do with some lower profile RAM to be comfortable under the CPU cooler, something like the Crucial Tactical LP would be perfect.

Paired with all that we’ve got the Ryzen 9 3900X, the 12-core, 24-thread behemoth, that happily runs at 4.2GHz all-core under load. And how are we keeping such a powerful thing cool in such a tiny case? The beautiful Noctua L12S cooler just fits the cramped confines of the ASRock board, though interestingly it does require the Intel fitting bracket not the AMD one.

With the capability of cooling a 95W TDP CPU, it’s a great fit. Though, obviously it does get super toasty in there, it doesn’t throttle or crash even under serious load. So I’m counting that as totes stable. 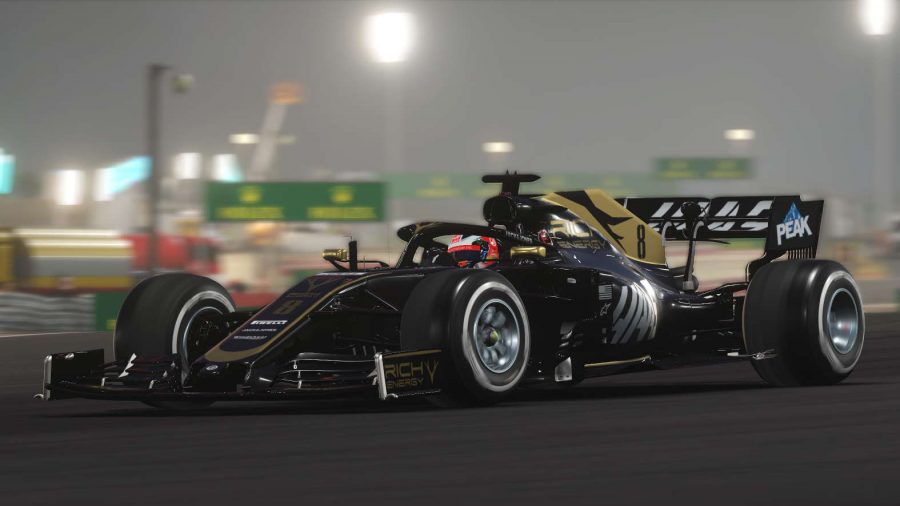 Despite being trapped in a cramped chassis with a super small CPU cooler, and on a small form factor X570 motherboard, the 12-core Ryzen 9 3900X still shines. It’s a touch slower in benchmarking than on something like the MSI MEG ACE X570, but not by much.

And still absolutely hoses any equivalently priced Intel processor you want to put near it.

Even though we’ve had to switch down from the RX 5700 XT to the GTX 1660 Ti we’re still getting great gaming performance out of this mini monster.

At the highest graphical settings at 1440p we’re seeing both Far Cry New Dawn and F1 2019 top the 60fps mark easily. And look great doing it.

The more demanding Assassin’s Creed Odyssey on Ultra settings proves a tougher task, with our machine only hitting 42fps at 1440p, but lightly tweak a few settings and you’ll be powering though at far higher frame rates.

The same can be said for Metro Exodus. On Ultra at 1440p we’re only just above 30fps, but it will only take some small settings tweakery to push above the 60fps mark. 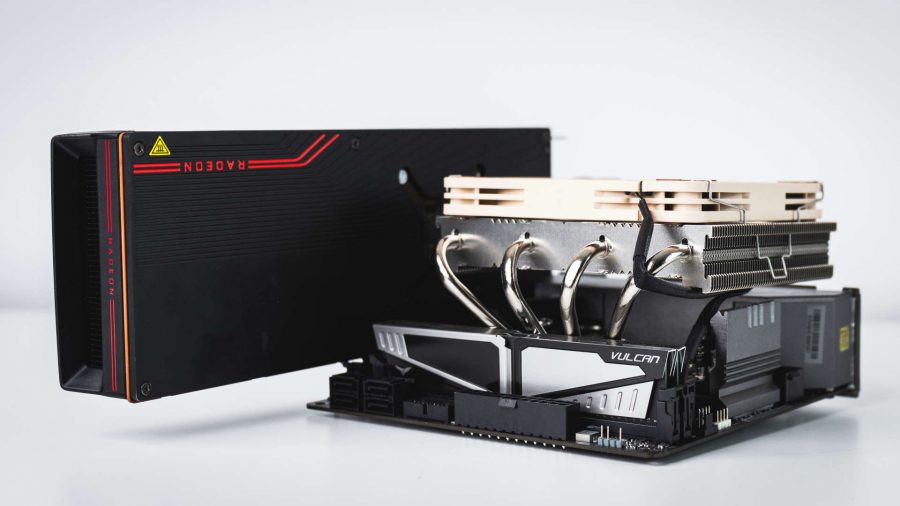 The problem with this build is it ain’t cheap. But that’s the combined problem of trying to create a mini gaming rig and trying to do it on the frustratingly expensive X570 motherboard platform.

The X570 and 12-core Ryzen combo are what take this micro gaming pig up to around the $1,500 mark. And if you were looking to jury rig an RX 5700 XT into the build like I was then you’re looking at way above that point, up to practically $2k.

But only a mad man or a total fool would do such a thing. And, honestly, we wouldn’t really recommend you drop the X570 or 3900X into such a build either.

Going with a more price-sensitive Asus B450I and a six-core, 12-thread AMD Ryzen 5 3600 CPU, will net you practically the same gaming performance and still give you a hell of a lot of processing power should you really need it. And that brings the cost to a much more reasonable $1,000.

The other thing is, having built a machine into this Cooler Master H100, we wouldn’t recommend it for a mini gaming rig either. It’s just too cramped in there and where the PSU sits does the system no favours.

And not being able to fit a full size GPU inside it leaves you open to idiots doing idiotic things. Something like the Phanteks Enthoo Evolv or the still gorgeous Bitfenix Prodigy will serve you far better and are much more fun to build into.

So, while we may have failed to build an entirely AMD-based gaming machine into this Cooler Master chassis, we’ve still managed to create a seriously powerful gaming PC with a palty footprint. And one which will deliver both great gaming frame rates and give you all the processing power you could need for those non-gamey workloads you might have.

But then you could also do something very similar, and almost as powerful, for a full $500 less.