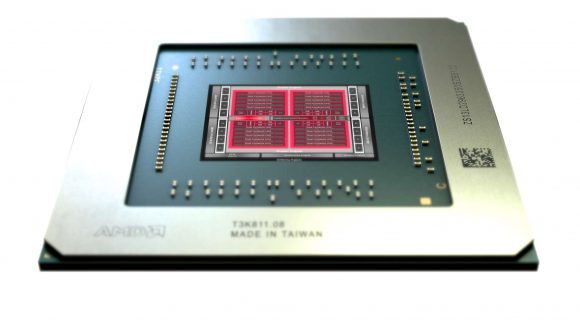 File this squarely in the apocryphal rumour category, but there is sudden speculation today the upcoming AMD RX 5600 XT is based on the red team’s second-gen RDNA 2.0 platform and will be using the Navi 21 GPU at its heart. The rumour has come the place where all modern graphics card rumour-mongering now originates – namely a handful of regular Twitter-based tech leakers.

And it comes with no source, nor any credible proof beyond the dubious claim that the “5600 seems to be 21.” Given the previous rumours about the Navi 21 GPU, it seems like a rather strange claim to make, especially the speculation that the next Navi GPU is going to be a monstrously big slice of silicon, potentially around 505mm2.

That’s still smaller than the ridiculously large 754mm2 TU102 chip inside the Nvidia RTX 2080 Ti, and also a shade under the 545mm2 of the RTX 2080, but would still make it twice the size of the current fastest AMD GPU, the Navi 10 in the RX 5700 XT. And the previous Navi 21 speculation is that it would house twice the number of compute units too…

Team Radeon is kicking off CES in earnest today, with the AMD CES 2020 press conference livestream starting at 2pm PT (10PM GMT). There is a lot of speculation about what’s going to be shown off at the event tonight, but we can be pretty sure – given all the RX 5600 XT leaks recently – that the new Navi-based card will be introduced.

The RX 5600 XT using the Navi 21 GPU would mean that it is the first card to be released using the RDNA 2.0 graphics architecture… and that could also mean it has the potential for ray tracing support. Is that something AMD is also going to introduce at CES this year?

But everything about the RX 5600 XT suggests nothing but a mainstream card, which would make the use of the Navi 21 GPU a huge surprise… unless the original rumours of a mega-chip are bogus. Even using a cut-down version of a 505mm2 chip – where 44 CUs have been deactivated to create the 36 CUs of the RX 5600 XT’s leaked spec – would be bizarre. That’s some expensive silicon to take a scalpel to.

Though maybe that’s where this GPU has come from. Maybe the 5,120 core, 80 CU full-fat Navi 21 GPU, built for some Radeon RX 5900 XT “Nvidia Killer” card, has to be supplemented by a lower-spec card using the discarded graphics chips that can’t make the grade housing the full core count of the complete GPU.

And maybe then we’ll also see the RX 5900 XT being introduced as Dr. Lisa Su’s “one more thing…” at the CES 2020 press conference tonight. We’ll be on the ground at the Mandalay Bay conference rooms to bring you all the news from the event as soon as it happens, if it happens.