Smarter people than me (not hard, granted) have been doing the math(s) and it looks like the new AMD Navi 10 GPU has more bandwidth than the seemingly more-powerful Vega 10 chip. Now, you may look at the relative memory bandwidth figures for both the RX 5700 XT and RX Vega 64 and conclude that these people obviously can’t count, but bare with us…

Sure, if you look in the specs tables and see the RX 5700 XT offering 448GB/s of memory bandwidth, and the RX Vega 64 delivering 484GB/s, then it looks like someone’s calculator is on the decline. But we’re talking chip-level bandwidth here, and in those stakes the new cache hierarchy of the RDNA-based Navi architecture is delivering just that little more than the old school, GCN-based Vega 10 silicon.

There are a lot of cool new design elements to Navi’s new RDNA architecture, mostly because it’s a GPU purely designed for PC gamers and not AI or data centre processing. AMD has taken its cues from the Ryzen 3000 design team and, where Vega focused on going wide with more cores, Navi is making each one perform faster and more efficiently.

But team Radeon’s engineers have also changed around the cache hierarchy inside of the Navi 10 GPU, offering more internal bandwidth, and greater efficiency, before it has to spit anything out to the GDDR6 memory subsystem.

So solid: These are the best SSDs for gaming right now

Talking with Gamers Nexus, the super-smart David Kanter, tech analyst of Real World Technologies, explains the new RDNA architectural features in detail. But accessible detail… it’s well worth a watch in its entirety. 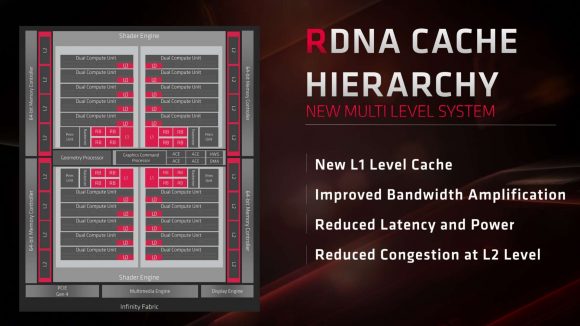 “If you do out the math,” says Kanter, “Navi 10 has actually slightly more bandwidth than a Vega 64, but it only has 40 compute units instead of 64. So, when you look at the bandwidth per core, it’s actually gone up quite significantly. And so you’re going to stall on your shaders less.”

That’s some pretty impressive work and makes us rather excited for what the touted ‘big Navi’ GPU might be able to deliver when the Navi 20 chip, potentially on the 7nm+ production process, comes out next year. When it’s got both the improved instructions-per-clock level of the new RDNA architecture and the boosted cache hierarchy, and can then put all that into a much bigger GPU than the Navi 10 design, we could see a monster gaming card next year. 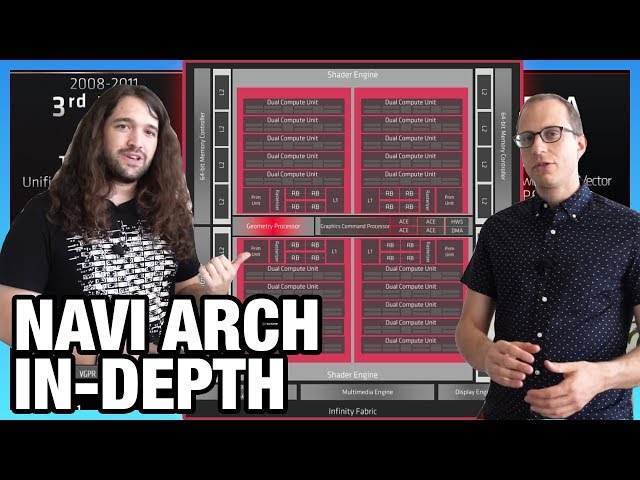 And that should be one with dedicated ray tracing hardware acceleration too. If that pops up anytime around Cyberpunk 2077’s release next year there could be quite the bun fight. Sure, there will probably be some of the Cyberpunk RTX pretties that run better on Nvidia GeForce cards, but if the game is using the Microsoft DXR API then AMD’s ray tracing hardware must be allowed a chance to play too.

Kanter also suggests that Navi GPUs’ clock speeds could have a greater bearing on performance in this generation too. And that could make RX 5700-series overclocking something to behold. 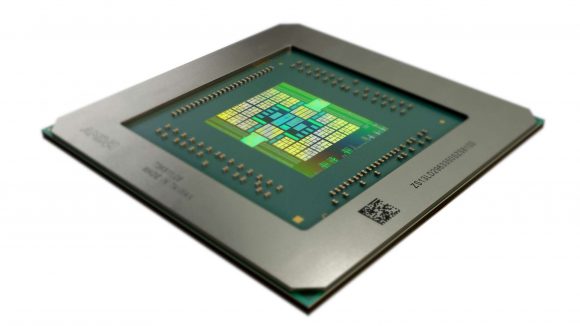 “I think just realistically you’re going to see better scaling with respect to frequency,” he says, “so it should be less bottlenecked on memory… we hope. And then it also has a benefit in terms of power. If you’re getting data from SRAM on chip that is always cheaper than getting it from DRAM off chip.”

These are exciting times in PC hardware land, and come July 7 – when both the RX 5700-series graphics cards and Ryzen 3000 CPUs launch – it’s only going to get more exciting. Especially when Intel and Nvidia start responding…