AMD is planning to spread its RDNA seeds far and wide throughout the gaming ecosystem, and that’s something baked into the architectural design itself, as the recently released RDNA GPU architecture whitepaper explains. RDNA represents the building blocks of the Navi graphics silicon, the tech behind the new Radeon RX 5700 XT and Radeon RX 5700 graphics cards, but it’s not just going to be limited to a pair of GPUs for the well-heeled PC gamer.

We’ve covered the AMD Navi RDNA architecture in a fair amount of depth already, but if you want to go get down and dirty to a deeper extent then the RDNA whitepaper is freely available for you to peruse at your leisure.

There’s little that’s particularly new in it that we haven’t already seen and heard about around the launch of the two new Navi cards, but there are a few little nuggets about where the RDNA architecture is set to go next. In short, as a gaming-optimised design that means pretty much everywhere you might play games.

“Thanks to AMD’s wide influence and extensive partnerships,” says the RDNA whitepaper, “the RDNA architecture will roll out and eventually touch nearly every part of the industry. The RDNA family will ultimately grow to include power-constrained smartphone and tablet processors, gaming consoles, cloud gaming services, and a full spectrum of gaming GPUs from low-cost to the highest performance, bringing the benefits of the RDNA architecture to millions of devices and people across the planet.” 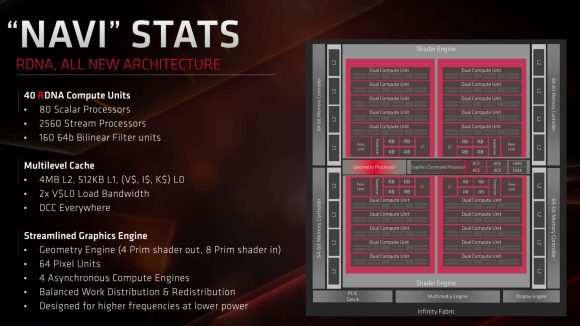 Again, none of that is new, but it does show the incredible reach that AMD has now that its GPU designs are going into Samsung smartphones, Sony and Microsoft’s next-gen consoles, and into Google’s Stadia streaming service. We’re assuming Google is going to be making the switch from the current Vega 56-a-like GPUs to newer RDNA/Navi-based ones in the future, especially given the section in the whitepaper about the architecture’s hypervisor agent.

“The hypervisor agent enables the GPU to be virtualized and shared between different operating systems,” it explains. “Most cloud gaming services live in data centers where virtualization is crucial from a security and operational standpoint.”

It also points out that this is also crucial for games consoles too. They may primarily exist as gaming machines first and foremost but modern devices also need to be well versed in compartmentalising that focus and being able to execute other workloads at the same time.

“While modern consoles focus on gaming, many offer a rich suite of communication and media capabilities and benefit from virtualizing the hardware to deliver performance for all tasks.” 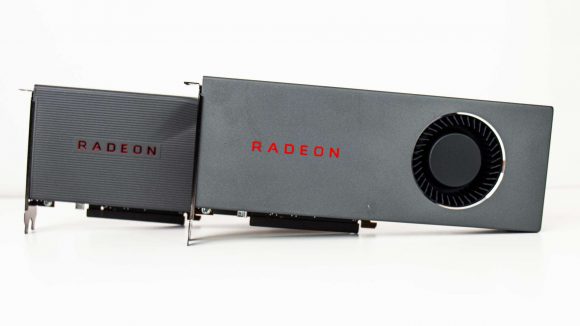 And, despite AMD launching a ‘new’ 600-series of low-cost, low-performance graphics cards based on last-gen (and last-last-gen) GPUs, team Radeon is also promising that it will be bringing the RDNA architecture down to its more price-conscious graphics card designs too.

We keep seeing instances of the similarly RDNA-based Navi 14 GPUs, expected to form the basis of Radeon RX 5600 and potentially RX 5500 cards, but there are also rumours of ‘Big Navi’ GPUs. A persistent rumour seems to suggest that we might even see a 4,096 RDNA core part this side of the new year, though whether that’s Navi 20, Navi 21, or Navi 23 we just don’t know yet. And in all honesty that sounds a little soon to us.

It looks like another 4096SP will be released in Q4？

The general consensus has been that a second-gen Navi would appear next year with Nvidia-rivaling high-end performance. That’s the one some have claimed AMD is internally referencing as the ‘Nvidia killer’ GPU.

Still, the RDNA whitepaper is claiming we’ll see gaming cards based on its architecture in “gaming GPUs from low-cost to the highest performance” and that promises to be quite a range going forward.