AMD announced the RX 6700 XT at its conference today, aiming to become the best graphics card for 1440p gaming at a high refresh rate. It’ll hit shelves on March 18 with an MSRP of $479, which actually undercuts the $499 MSRP of the Nvidia RTX 3070.

Not only are most of the best gaming monitors 1440p, but AMD identifies that the resolution has the fastest adoption rate year-on-year. This could help the RX 6700 XT become one of the most popular GPU choices, if you manage to cop one, that is.

Reference cards will be available directly from AMD, in addition to AIB partner cards shipping from March 18 – unlike Nvidia launching the RTX 3060 without Founders Edition cards at the end of last month. Despite this, ongoing stock issues are still expected to affect the RX 6700 XT, as there’ll reportedly be just 100 reference units before the card reaches its end of life, and a limited amount of custom cards initially, too.

The limited availability could see the RX 6700 XT creep above its $479 MSRP with inflated prices, much like we saw with the RTX 3060. Factor in that GPU stock could struggle until 2022, and it could prove to be just as difficult, if not harder to get your hands on the new card. Just be careful of fake graphics card listings if you attempt to grab one from a reseller. 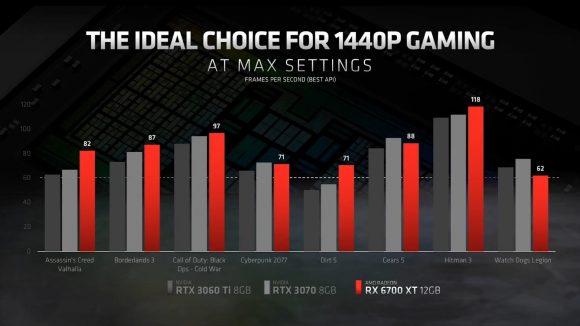 Benchmark graphs shown by AMD in the livestream place the RX 6700 XT ahead of the 3060 Ti and 3070 in titles like Hitman 3 and Dirt 5, although it falls behind the cheaper 3060 Ti in Watch Dogs Legion. 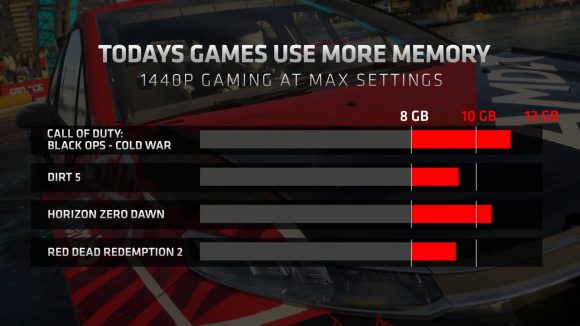 AMD also stresses how important a healthy serving of VRAM is for the newest games, showing how titles like Call of Duty: Black Ops – Cold War and Horizon Zero Dawn eat up over 10GBs running at maximum settings on a 1440p display. This does make us doubt the rumour that the non-XT 6700 could have just 6GB of VRAM.

You can watch the full announcement here. We previously thought the RX 6700 XT would go up against the 3060 Ti, but stand corrected as it carries a price-to-performance ratio much closer to the RTX 3070. This could mean the so-far-unannounced RX 6700 could be the true 3060 Ti rival, should it see the light of day any time soon.