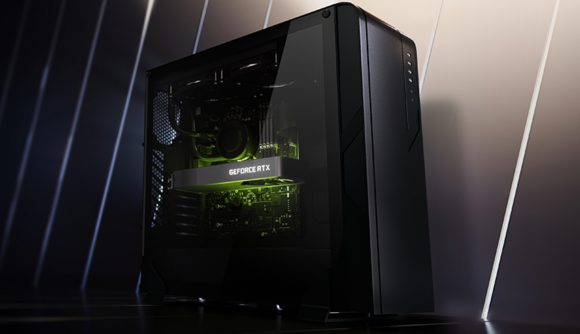 Nvidia’s upcoming RTX 3060 graphics card will only be available from third party board manufacturers, according to French hardware site Cowcotland. This is a first for the green team this generation, as all the previous RTX 30 series cards have been available for purchase directly from Nvidia in its reference design at launch.

Although we aren’t expecting it to be easy to get your hands on an RTX 3060 when it releases later next month, particularly due to stock issues that have plagued each RTX 30 series release so far, this news has likely made it even harder. Despite the RTX 3060 not being a flagship card, we expect demand will still be very high given that the mid-range Pascal equivalent, the GTX 1060, is still the most popular graphics card according to Steam’s December hardware survey. Plus, gamers will continue to scramble to get hold of any next generation graphics card they can, with the exemplary ray tracing performance we’ve seen on the Ampere architecture.

Adding to expected availability issues is the potentially disappointing price tag. While reference cards sold directly from Nvidia are always listed at the recommended retail price, which should be $329 / £299, third party retailers sometimes charge inflated prices for custom cards.

On the other hand, reference cards are not always the best for performance – third party manufacturers often have improved cooling solutions, allowing you to further overclock your GPU.

It seems as though Nvidia and AMD are headed in the opposite directions with this move, as the red team recently extended the production of its reference RX 6000 series cards instead of nixing them. Even without reference designs, however, the RTX 3060 will still likely be a good choice for the best cheap gaming PC build with its low recommended retail price. Have your refresh button at the ready for late February…