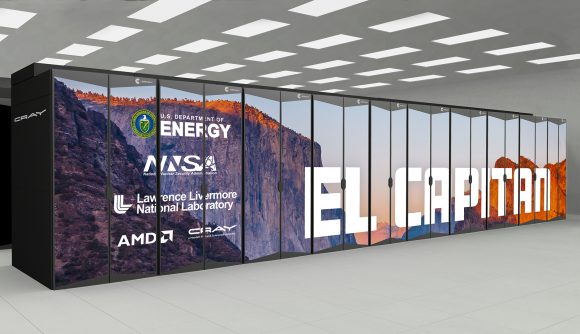 AMD Zen 4 will power the world’s fastest supercomputer in 2023, nicknamed ‘El Capitan’. Working with HPE, owners of supercomputer experts Cray since early 2019, AMD will deliver El Capitan to the Lawrence Livermore National Laboratory for use by the US Department of Energy’s National Nuclear Security Administration – you know, the nuclear stockpile people.

Yep, AMD’s latest supersystem will be used to “support National Nuclear Security Administration requirements for its primary mission of ensuring the safety, security, and reliability of the nation’s nuclear stockpile.” It’s also set to be the second exascale supercomputer of its kind, surpassing the AMD-powered Frontier system set for delivery in 2021.

AMD’s touting EPYC ‘Genoa’ chips built on the yet to be disclosed Zen 4 architecture for El Capitan, alongside next-gen Radeon Instinct GPUs on a “new compute optimised architecture.” AMD recently forked its GPU architectures into compute-focused (GCN) and gaming-focused (RDNA), and this is sure to be an evolution of the bandwidth-happy former. With 3rd Gen AMD Infinity Fabric interconnect technology, like that used in the best CPUs for gaming, AMD’s touting a might some ten times the world’s current fastest system.

Each ‘blade’ of El Capitan, built around HPE Cray’s Slingshot interconnect, will feature a 4:1 GPU to CPU ratio, all connected up by Infinity Fabric and sharing unified memory. Zen 4 CPUs will also support next-gen memory and subsystems for AI workloads. That’s something Intel’s been keen to get on early with its Ice Lake processors, but which will likely play a larger role in both companies’ chips over the next few years. 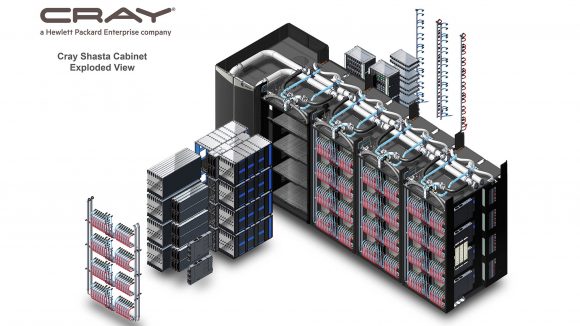 All that power will go into advanced 3D exploratory simulations and modelling tasks to ensure the US nuclear stockpile’s “reliability and security.” Its primary missions include modernisation of the US nuclear stockpile and inertial confinement fusion (fusion reaction research). In its spare time, El Capitan’s might will be turned to medical and drug research, such as cancer drug discovery, and environmental work.

The announcement is a big win for AMD in terms of bolstering its reputation, as it will see its processors taking on a job that’s rather critical in the eyes of the US government.

“El Capitan will drive unprecedented advancements in HPC and AI, powered by the next generation AMD EPYC CPUs and Radeon Instinct GPUs,” Forrest Norrod, senior VP and GM of the Datacenter and Embedded Systems Group at AMD, says. “Building on our strong foundation in high-performance computing and adding transformative coherency capabilities, AMD is enabling the NNSA Tri-Lab community—LLNL and the Los Alamos and Sandia national laboratories—to achieve their mission critical objectives and contribute new AI advancements to the industry. We are extremely proud to continue our exascale work with HPE and NNSA and look forward to the delivery of the most powerful supercomputer in the world expected in early 2023.”

HPE is also working with Intel to deliver the DOE another supercomputer nicknamed ‘Aurora’. This machine will utilise the Intel Xe architecture, alongside the company’s Xeon processors.