In accordance with a teaser that emerged late last year, Ubisoft’s latest economic management game Anno 1800 is getting a third expansion pass, and the publisher has now revealed the individual DLCs that will be arriving as part of the third season. There’s also a brand new patch out today for Anno 1800, which fixes a variety of minor bugs and ornament issues.

First, though, the DLC packs. Season 3 kicks off with Docklands, which comes out February 23. This DLC adds the new warehouse district, a modular zone that will begin with the construction of a main building, but which can then be expanded to turn your harbour into a “global trade hub”. Ubisoft says it’s inspired by the UNESCO World Heritage site Speicherstadt in Hamburg, Germany. Here you’ll meet Captain Tobias Morris, who will help you link up with companies around the world in import/export deals for your city.

Next up is Tourist Season, scheduled for sometime this spring. You’ll want to keep new visitors entertained in your city while feeding them luxurious dishes cooked up at fancy restaurants. You’ll also be able to establish a bus network, which will take your guests around to your island’s most attractive attractions. 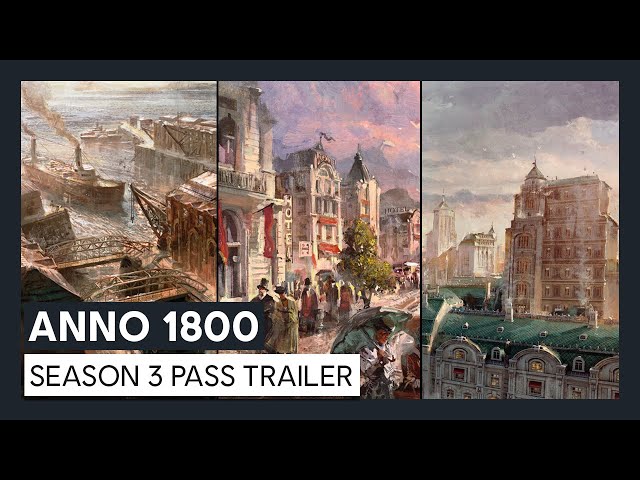 Finally, Season 3 will conclude with The High Life. Due out this summer, this DLC will add skyscrapers and malls, which you’ll use to satisfy your citizens’ increasingly discerning taste for luxury products. You’ll have more options for monuments, restaurants, hotels, and more when this DLC arrives.

Ubisoft says there will be a free game update accompanying each DLC release, and these will be focused on “improving the gaming experience”, presumably by addressing bugs and balance issues introduced by the new game elements.

Today, Anno 1800 also saw game update 9.3, which fixes several issues with Twitch and DLC-related ornaments and cuts down on the number of notifications you’ll get from investors when you open the World’s Fair monument screen, and from scholars when you’re trying to open the menu for the Research Center.

The full list of patch notes can be found on the Anno Union. You can also read up on our guide to Anno 1800 mods if you’d like to experiment with the established formula, or check out our Anno 1800 tips guide if you’re just getting started.