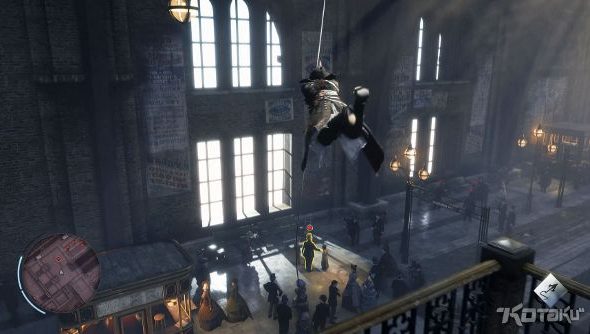 The game once whispered about as Assassin’s Creed: Victory – because, brilliantly, Victorians – is now Assassin’s Creed: Syndicate. It’s the first full game in the series to be built by Ubisoft Quebec, after they impressed with their Black Flag DLC – and quite possibly the first Assassin’s Creed to have swappable protagonists in brother-sister duo Jacob and Evie.

After more leaks than you’d find in a chicken pie, Ubisoft are finally ready to talk to the great unwashed.

The world premiere is due to begin at 5pm UK time, and with any luck will start playing this box below my words:

Marketing tells us that Syndicate will “transport millions of gamers to an astonishing recreation of London during the Industrial Revolution where they will find themselves immersed in a game world they’ll have to see to believe”.

An Assassin’s Creed leak in December told us much more: an early build had the player strutting around London in a top hat, swinging through train stations on a grappling hook and struggling hand-to-hand with enemies on top of moving stagecoaches.

Will Gothic London powder your nose any more powerfully than Paris, do you think?