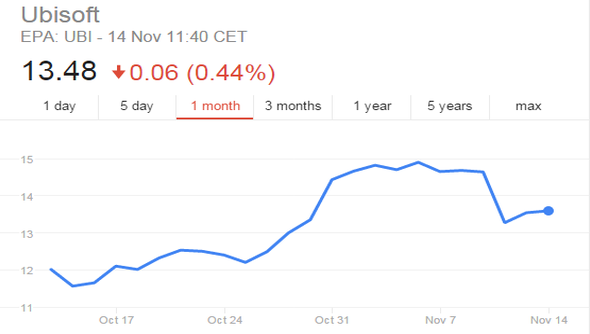 Ubisoft’s stock fell by 12.8% following Assassin’s Creed Unity’s release. While reviews have been largely positive, a great many bugs were discovered after the game launched – this ranges from animation glitches, to the player falling through the floor, to the online co-op failing to connect players.

Ubisoft also received a backlash from fans for withholding review copies from publications until the release day in the US and embargoing the reviews written from review events attended the week before.

Ubisoft are currently working on patches to address specific problems such as Arno falling through the ground, the game crashing when players join a co-op session, Arno getting trapped inside hay carts, and the long delay in reaching the main menu screen when starting the game.

However, Ubisoft have responded to the poor quality of the launch and why they delayed reviews as long as they did. The main reason, they say, is because of Assassin’s Creed Unity’s “significant online components”.

“Having the online elements available and having populated worlds is essential to creating a representative and complete experience for reviewers,” a Ubisoft spokesman told the BBC. “Achieving this prior to launch is incredibly complex, which is why some games are being reviewed much closer [or] even after the game launches.”

In their last financial call with shareholders, Ubisoft said they expected to earn €1.4 billion by the close of the financial year. A large part of that was meant to come from the success of Assassin’s Creed Unity, The Crew, and Far Cry 4. Unity, despite its bugs, will sell well. It’s part of a very popular franchise but the response to its launch bugs could affect sales of Far Cry 4 and The Crew. Particularly as they’re both games with “significant online components”.

Fraser’s written an Assassin’s Creed Unity port review that delves into some of the graphical issues he’s discovered.