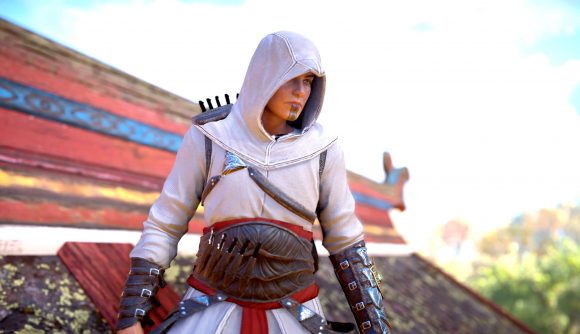 For as many wonderful heights as the modern Assassin’s Creed games have reached, they have lost a bit of the spirit of their predecessors. Ubisoft is at least keeping the older games alive through cosmetics, and after the Black Flag ship set, Assassin’s Creed Valhalla is now going to let you dress up as the OG assassin, Altair.

Alongside Title Update 1.2.0, the Godly Reward pack went live in the in-game store, for free. Ubisoft is branding it as a ‘community appreciation gift’, and it includes Altair’s outfit, 300 Opals, and the rewards previously associated with the limited-time Yule Festival event. The stats on the Altair gear are identical to those of Bayek’s outfit – which is to say, not especially great – but hey, at least it looks cool.

Players have had some issues actually claiming the Godly Rewards pack, but a hotfix has just gone live that should correct that problem. (Though, apparently, an investigation into “other complications” is ongoing.) Either way, hey, it’s free stuff!

The new Title Update brings more cats to the world, while also introducing big features like transmog, a close camera option, and new skills. The spring-themed Ostara Festival is scheduled to begin on March 18.

Thank YOU for going above and beyond by helping shape Assassin’s Creed Valhalla for all players!

The Godly Reward community appreciation gift is now available for FREE in the Animus Store. 💫

For more RPG games or action-adventure games – depending on your Assassin’s Creed preferences – you can follow those links.