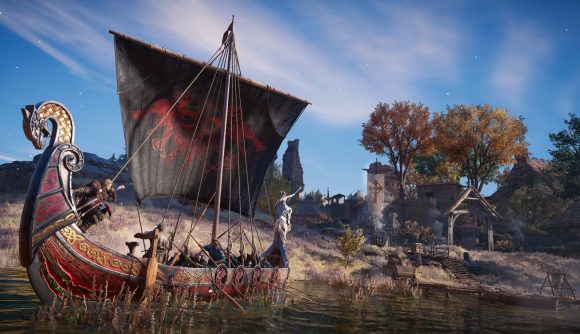 Sharpen those bearded axes, because Assassin’s Creed Valhalla has a major title update on the way. Ubisoft’s big Viking game will see Title Update 1.3.1 arrive September 7, and it’s adding three new maps for the River Raids mode, new gear and abilities to find, and some new extra-hard difficulty options for the Jomsvikings among us.

The new maps include the rivers Erriff and Berbha in Ireland, and the Rhine in mainland Europe. Along them, you’ll find two new river champions as well as the new champions of the faith, all of whom are wielding pointy new weapons for you to add to your arsenal. There are five new weapons in total added to River Raids, along with a new set of armour and three new ability tomes. They all sound delightfully brutal: spinning harpoon, percussion arrow, and precision axe throw (which targets an enemy’s weak point).

Title Update 1.3.1 also makes some changes to the rune socketing system. Some runes will now only affect the weapon they’re affixed to, rather than being ‘global’ buffs to your character. This doesn’t make your build weaker, but it does allow for more considered customisation. A rune that adds fire damage, for instance, adds it to the weapon it’s slotted in, meaning the weapons you hold in each hand can have their own effects.

Some runes will remain generalised, depending on what they do – so a buff to assassination damage still just adds to your overall assassination stat. Armour runes are unchanged as well.

Across the board, adjustments have been made to scale ration-based healing based on difficulty. On easy and default difficulty, they’ll do the normal 100% of intended healing, but on hard that drops to 80%, and on very hard and nightmare it’s reduced to 60%.

Title Update 1.3.1 also makes a host of adjustments and fixes to quests, cinematic effects, and certain fiddly quests that weren’t working as intended, particularly in the recent Siege of Paris DLC.