“Peace – that’s a strange word in the mouth of an invader,” says King Charles the Fat, as he relaxes deep in the recesses of a dank Parisian brothel. Eivor, a Norse warrior on a visit from England, has tracked the monarch down on the off chance he might be convinced to remain in Francia, rather than setting his sights on Eivor’s newly adopted homeland. You can’t deny he has a point: Eivor and the Raven Clan probably have even less of a legitimate claim to the lands they now inhabit than Charles does.

Since this is Assassin’s Creed Valhalla, however, it quickly becomes clear that peace was never really an option. The Siege of Paris, Valhalla’s second expansion, sees Eivor cross blades with countless Frankish soldiers and butt heads with her vengeful kinsman Sigfred, who is determined to put Paris to the torch.

As an expansion, The Siege of Paris is more constrained than Valhalla itself, and it benefits from more verticality too, both in terms of its physical spaces and in its approach to encounter design. There’s a bit more depth here than can be found in the vast expanses of Valhalla’s fractured England, and it’s a welcome return to some of what made Assassin’s Creed games of the past so much fun.

Unfortunately, some of its newer ideas don’t work very well, and the return to a more mechanics-focused experience can at times tug at the seams of Assassin’s Creed’s current open-world framework. 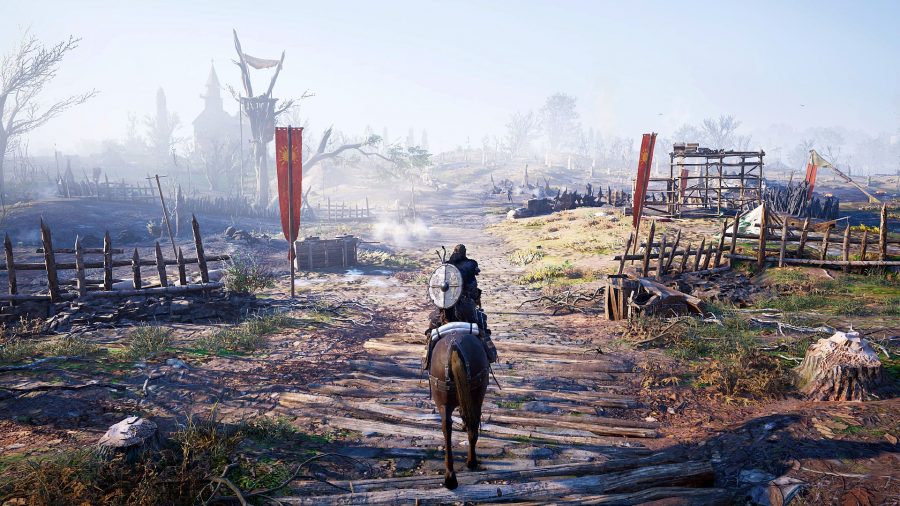 Eivor makes the trip to Francia after Sigfred’s niece Toka appears in Ravensthorpe, along with a Frankish resistance fighter named Pierre. They’ve come to England with tales of vast riches to be looted, but no Norse chieftains seem to be taking the bait. As it turns out, the real reason for the visit is because Toka is desperate to find support for her uncle, who has vowed to take revenge on King Charles, despite lacking the army and planning necessary for the attempt.

it's jarring how low-budget the rats look

Valhalla recommends getting to power level 200 before starting the Siege of Paris, and I can personally attest that heading in before that makes for a stiff challenge. Frankish soldiers come in some nasty new varieties, including mounted heavy cavalry and some new variants of the Goliath archetype we’ve seen roaming around in England.

Fortunately, while much of Francia is beautiful rolling hills, hedgerows, and poppy fields – the perfect hunting ground for a knight – Paris itself offers Eivor opportunities to avoid these enemies almost completely. The sorely missed rooftop parkour of older Assassin’s Creed games returns here, and there’s a sewer system below that connects several of the city’s districts. 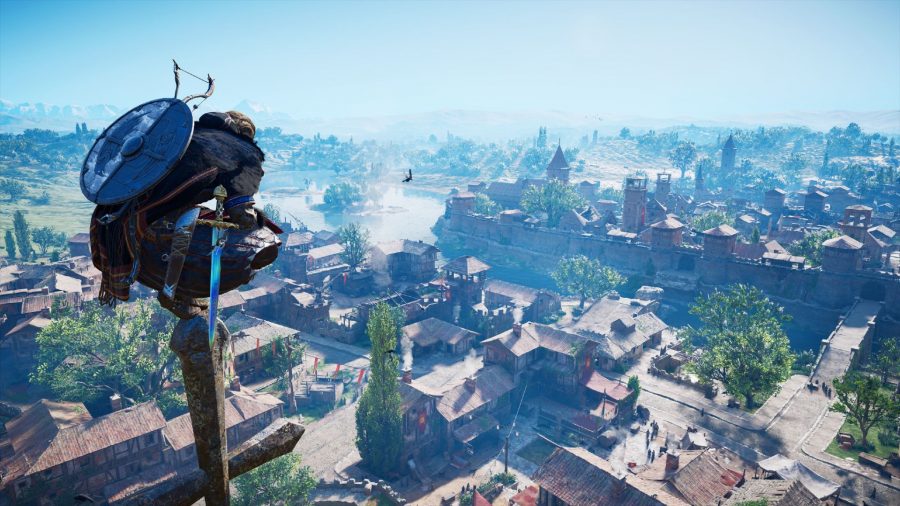 The sewers are where you’ll run into what is probably the expansion’s least successful addition. Stricken by plague, Paris has a rat problem – one that you’ll share as soon as Eivor ventures beneath the streets. The concept here seems lifted almost directly from A Plague Tale: Innocence, where the rats flow like a malevolent liquid mass of hunger and teeth. Here, they’re hardly menacing: you’ll see a couple dozen at a time at most, and it’s jarring how low-budget they look, especially in such an otherwise beautiful game. They’ll chew away at your health and cause you to drop any heavy object you’re carting around, but don’t expect the writhing, disease-riddled masses present in Asobo Studio’s 2019 breakout hit.

Rats do a few things in the Siege of Paris. They’re a new type of environmental hazard, and thus figure into several traversal puzzles you’ll run into as you explore the sewers. They can be frightened into grates by swinging your weapon at them, but they’ll come back quickly unless you seal them in with some nearby sliding object. Sometimes they’ll be sealed when you arrive, and there are a few points where you can release them in order to take care of some pesky guards who, unlike Eivor, are totally defenseless against rodent attacks. Explore enough, and you’ll find a new ability for Eivor that lets you conjure a swarm of rats when needed, Dishonored style.

At points along the main storyline, there are several key assassinations that are presented as ‘blackbox infiltration’ missions, the type first introduced to the series in Assassin’s Creed: Unity. There are a total of five of these, and so I’ll avoid spoiling any of them, but they’re another welcome return to one of my favourite features of the series, and one that’s been conspicuously absent since Origins’ soft RPG reboot. 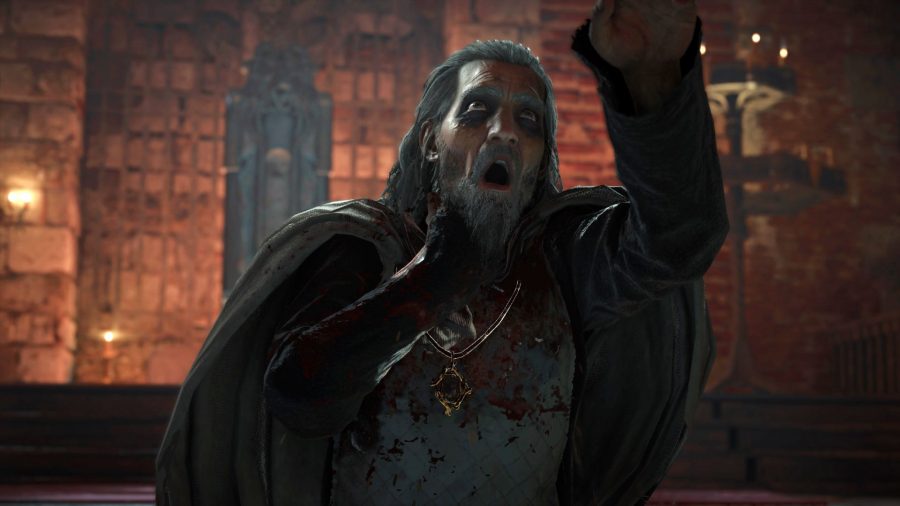 They’re not as open-ended as Hitman missions are, and certainly not designed for the same level of replayability, but they have multiple phases and feel much more complex than the brazen Anton Chigurgh-style hits I’ve been doing in the past few stealth games. You’ll pick up a clue by finding a discarded note or overhearing a conversation, then follow a trail of breadcrumbs into the target’s lair. Perhaps a maid knows of a service entrance, or maybe a traveling troupe of actors has heard where the king is staying – all it takes is one gentle prompt and you’re on your way.

Of course, there’s still the option to break down the front door and murder everyone who heaves into view, but I appreciate the opportunity to case things out, search for clues, and see how far each little thread takes me. Either approach pays off with murdering a cartoonishly awful person, but the more considered method usually adds a twist of irony to their grisly end.

Elsewhere you’ll be spending most of your time flitting between activities and exploration, doing the Assassin’s Creed things you’ve either come to know and love or long since abandoned by now for lack of depth. The Siege of Paris has pockets of focused level design – albeit ones which frequently abandon any pretense of being realistic places – but more often than not it’s the same kind of mile-wide, inch-deep experience that characterises side activities in both Origins and Odyssey. 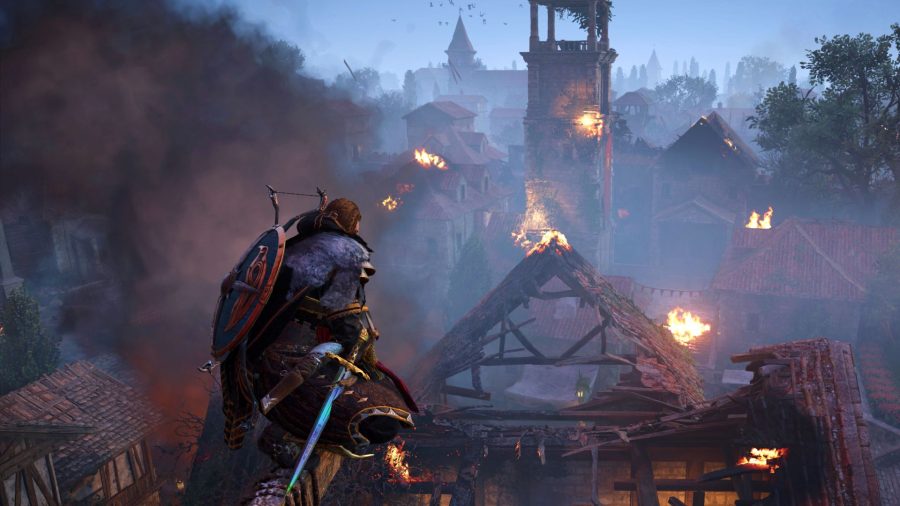 That’s not necessarily a bad thing. Valhalla is a fun game, even if one castle siege is much like the next, or if it uses the same tricks over and over to keep you temporarily locked out of houses containing scraps of upgrade material or other treasures. The Siege of Paris is no different, delivering digestible gameplay snacks that you can start and finish in a few minutes. Figure out how to break into a building, kill all the bad guys in a bandit camp, raid a monastery or two – you spend far more time traveling between activity nodes than you spend engaging in the activities themselves, and Francia is another gorgeous landmass to dreamily gallop through en route to another glowing map marker.

The new rebel missions are emblematic of this. Once you arrive in Francia, Pierre will put you in touch with the local underground separatist fighters who, like Sigfred’s Norse warriors, also want to weaken Charles’ grip on Paris. Agents around the map will offer you quick little missions to complete in exchange for infamy and special currency. You’ll head out along with a couple of resistance fighters to disrupt a Carolingian supply convoy or eliminate troop reinforcements, then report back for your reward. They’re fast, not particularly demanding, and seem primarily designed to kill time.

When you’re dealing with the Vikings, sooner or later you have to deal with the issue of raiding and plundering on foreign soil, and The Siege of Paris is perhaps the most directly Valhalla has wrestled with the morality of its chosen heroes and the setting. To be sure, the Frankish assassination targets are obviously and absurdly evil, but Eivor is forced to contemplate early on that even on their supposed mission of peace, they don’t really have an ethical leg to stand on. Eivor and the Raven clan want to urge Charles toward peace, but only so they can keep the land they’ve invaded and stolen. As the story unwinds, Eivor also has to deal with the creeping suspicion that ancient ideas of honour and glory are often just fig leaves for wanton carnage and greed. 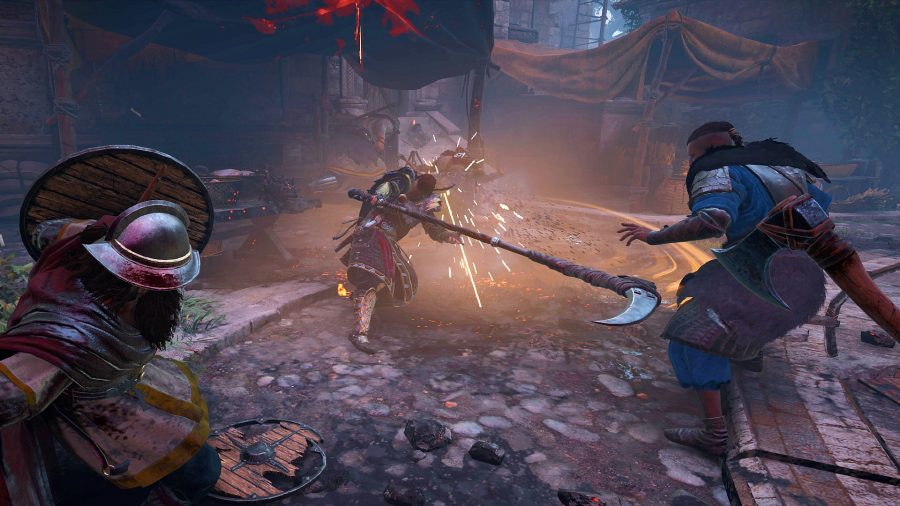 As much as I’ve enjoyed the new trilogy, what’s troubled me about them is that I’m so rarely given the chance to really examine any of the beautiful places that have been so lovingly recreated from archaeology and mythology. Assassin’s Creed is now all about going somewhere, all the time, and I always feel as though the picture-perfect landscapes are meant to be seen as from a moving train, rather than inhabited.

Catching up? You can buy Assassin’s Creed Valhalla here

The infiltration missions in the Siege of Paris are a welcome salve for this, asking me to examine a tavern, a church, or a fortified villa, paying attention to what people are doing and how they’re engaged. It’s a shame there are only a handful of these in Siege of Paris, and that some of them culminate in noisy boss battles instead of assassinations.

Even still, these are missions with multiple phases that each add tension and reward to their final confrontations. When a villain gets the chance to stammer out a shocked “How did you get in here?” before I bury the blade, I find myself wanting to tell them exactly how I pulled it off. 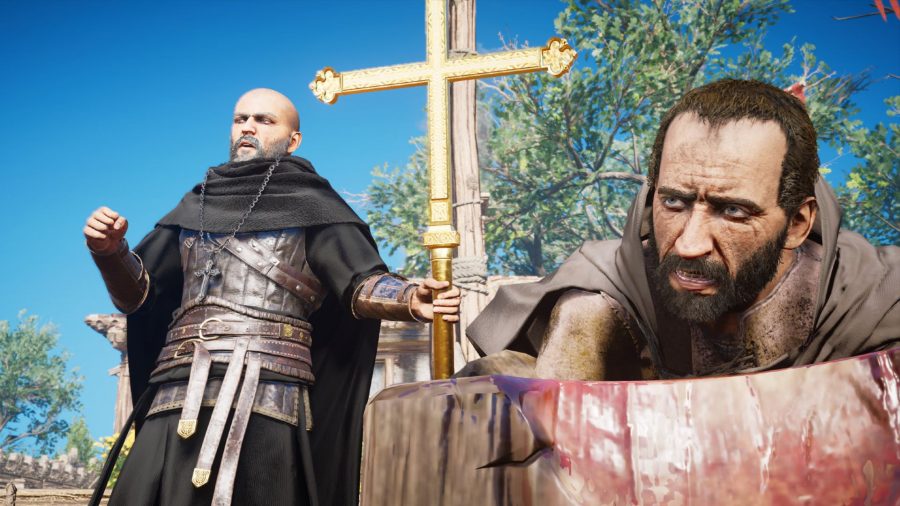 That’s fine, and I’ve loved the hundreds of hours I’ve spent playing at being a legendary warrior in Egypt, Greece, and England. But the Siege of Paris, flaws notwithstanding, is a bittersweet reminder of how much I also enjoyed being a legendary assassin.

The Siege of Paris release date isn’t far off, but if you’re still grinding your way through Valhalla then you can read our Wrath of the Druids review here. And of course, if you’re a lapsed fan of the series then you can buy Assassin’s Creed Valhalla here.

The return of classic Assassin's Creed infiltration missions makes this DLC a worthwhile trip for long-time fans and recent devotees alike, although not all of its new ideas work quite so well.