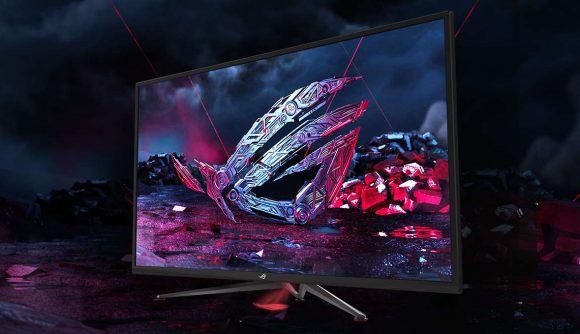 Asus has unveiled a monster AMD FreeSync 2 HDR gaming monitor that I need in my life. I thought Samsung had nailed it with the pre-CES announcement of its own new displays, but the 43-inch ROG Strix XG438Q might have just swung the search for the best gaming monitor back in Asus’ direction.

CES 2019 has seen Asus unveil three new ROG Strix gaming monitors, with a 49-inch 32:9 super ultrawide and a curvy 32-incher, but it’s the 43-inch 4K screen that I want. Up to now only Philips has been putting the effort in releasing 16:9 displays above 32-inches, and it’s gratifying to see Asus making the switch to the big-screen.

When it comes to gaming monitors, sometimes bigger is better, and especially when we’re talking about 4K displays. A 27-inch screen is all well and good when you’re running at 1440p, but when you’re trying to make the most of the extra 4.6 million pixels the 4K resolution offers you need a bigger panel. The extra fidelity of a 3840 x 2160 res is lost without sufficient screen real estate.

The Asus ROG Strix XG348Q is being called “the world’s biggest and fastest 4K FreeSync 2 HDR gaming monitor” and at 43-inches it’s certainly that. Asus had to add in the FreeSync caveat as otherwise the Nvidia-friendly Big F***** Gaming Displays would take issue with at least one of those two claims.

Asus is using a VA panel for the big-screen display, with its own custom-designed backlights, which ought to give it decent contrast levels and hopefully justify that DisplayHDR 600 certification. The VESA standard ensures the monitor is capable of 10-bit colour and can hit 600cd/m2 peak luminance when required. Though the specs do say the typical brightness of the display is a pretty standard 450cd/m2.

The VA panel’s also being run at a decent clip too, with its native 4K resolution capable of operating with a 120Hz refresh rate and a 4ms response time. And, because it’s a serious gaming monitor, not just a disemboweled 4K TV, the ROG Strix screen has been optimised for the lowest input latency possible. 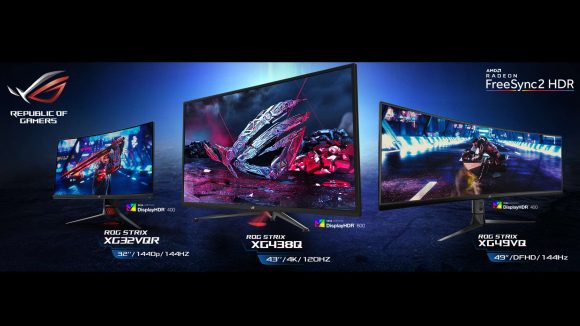 To be fair the other two ROG Strix screens, the XG49VQ and XG32VQR, both support low input lag and have their own 144Hz refresh rates, but I find it tougher to get that excited about them. I’m all over that new Samsung 49-inch super ultrawide because it’s gone for the taller 5120 x 1440 resolution, where this Asus screen has stuck with the far-too-letterboxed 3840 x 1080 res.

They’ve all got FreeSync 2 HDR compatibility too, which has taken on a far greater significance this week as Nvidia announced that it is finally supporting adaptive sync – the basis for FreeSync – with its graphics cards via the G-Sync Compatible initiative. That should mean for panels such as the XG438Q its smooth gaming will be achievable using whichever GPU vendor you ally yourself to.