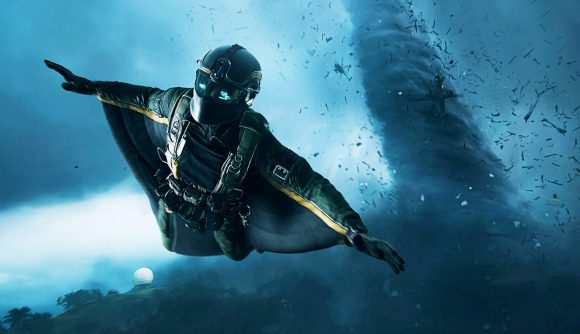 Earlier this year, DICE unveiled Battlefield 2042’s Portal – a mode that lets players use maps, vehicles, and loadouts from across games in the series and fold in their own custom-made rulesets to create their own custom experiences, which can then be shared with other fans. Now, the devs have just shared a very detailed look at how this mode will work which is, I kid you not, well over 3,000 words long. So, buckle up.

The in-depth rundown of the upcoming PC game’s Portal mode comes alongside a new gameplay reveal (below), which shares a first look at Battle of the Bulge, El Alamein, Arica Harbor, Valparaiso, Noshahr Canals, and Caspian Border. Starting at launch, there’ll be some readily available default experiences that will let players relive these classic maps in the style fans will remember, and through Portal, players can dive into these direct from the game – “or if you prefer, you can use these experiences as starting points that you can edit to create something more personal”.

Creating custom experiences starts with the ‘Core’ part of Portal, first by choosing the game mode that’ll serve as your foundation. At launch, these will include Conquest Large, Conquest, Rush, Free-For-All, and Team Deathmatch – the latter two of which are most deeply adjustable using the game’s Rules Editor – a “powerful visual programming tool”, covered below – on top of the game’s other modifiers and toggles.

Then there’s map rotation. Depending on the mode you pick, there are tons of map options to choose from, including BF2042’s 128-player maps, classics, and even some “predefined smaller variants” of existing maps in some cases. You can set the maximum player counts to be pretty much whatever you’d like to, too. The full list of map layouts is included in the blog post.

You can then select things like the game mode details you want to set. With Conquest’s ruleset, for example, you can adjust the maximum player count, elect to make it asymmetrical or not, and add bots. In modes like Rush and Conquest, “you’ll be able to modify the game time, the reinforcement multiplier, the reinforcements removed per kill, as well as the per-squad character limit (up to a maximum of four), and the rules for squad spawning”.

Then come the modifiers, which reach across facets like gameplay, soldier behaviour, vehicles, UI, and AI. To give you a flavour of what these allow you to change, gameplay modifiers can include things from friendly-fire and aim-assist settings to classic soldier weapon tuning and extreme weather events. Sliders and custom value inputs then let you determine aspects such as projectile speed and damage multipliers. The other categories let you adjust things like the health regeneration, squad revives, and movement of soldiers, the types of vehicles that feature in your experience (and how they spawn), the UI features you want included (like a compass, mini-map, and so on) and ping system, and bot settings – so, whether they’re PvP or PvE, for example. Phew! 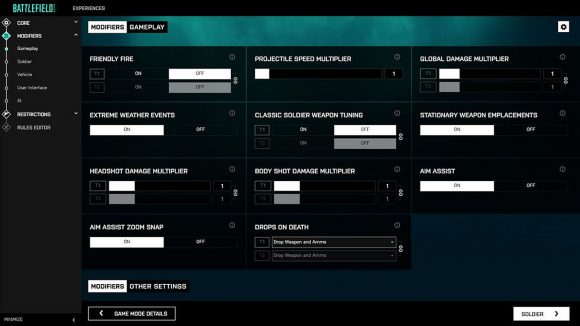 Later come the ‘restrictions’ – by which, the devs mean the Battlefield eras, characters, weapons, vehicles, and other similar features you want to include. Then, through the rules editor visual tool you can “go wild”. Using its toolbars and controls you essentially flesh out scripting that determines the really deep-level conditions and behaviours of the experience you’re putting together. There are ‘help’ options that will assist you through it, as it’s a pretty complex-looking beast. There are also templates to build off of if you’d like to start with a little inspiration. Experiences can be shared as works-in-progress by sharing the URL attached to them, while completed ones can be shared using a generated ‘experience code’.

Niftily, you don’t actually need to own Battlefield 2042 to create things through Portal – anyone with an EA account “in good standing” can turn their hand to putting an experience together to then share with others that do own the game. You just need to access the tool via the web on your PC (or phone or tablet, if you like). 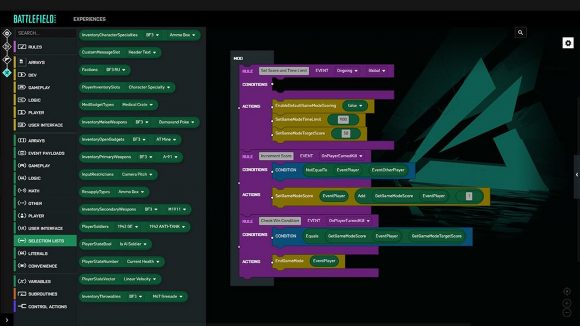 If you want the full rundown, you can find DICE’s helpfully detailed run-through of how the Portal mode will work in Battlefield 2042 at that link. The Battlefield 2042 release date is coming up soon on November 19, 2021.