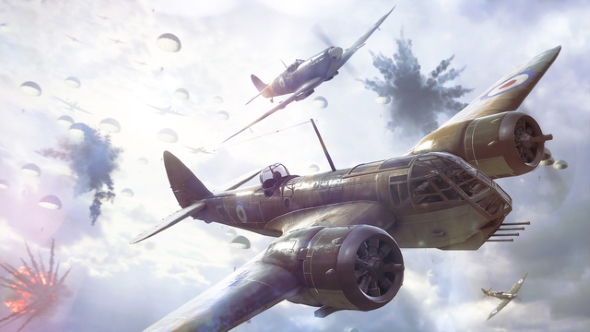 Battlefield V will include Airborne, a new multiplayer mode in which players will parachute out of planes and work as squads to destroy enemy targets. EA announced Airborne in a tweet Thursday along with a piece of concept art that features dozens of canopies opening in the sky behind combat aircraft.

It’s a simple and familiar idea at this point: You and your squad will jump out of a perfectly good airplane and float down to the battlefield below. On the ground, you’ll be tasked with taking out enemy artillery positions or defending them against attackers. It sounds as though defenders may also have anti-aircraft guns to crew, as EA says they’ll have to “make sure the threat from above is dealt with.”

World War II has been the setting for a lot of really good games. Here’s our list of the best WW2 games on PC.

That’s the extent of the official information EA’s provided about the mode. And sure, jumping out of planes in squads sounds a little old hat after the past year of battle royales, but with Battlefield V’s World War II setting, having airborne operations represented in the game could hardly be more thematically appropriate.

Market Garden is probably the best-known large-scale airborne operation of the war. But Market Garden’s objective was to secure bridges on the Rhine River, as any good Close Combat player knows. The context for Battlefield V’s airborne mode may be Operation Varsity, in which elements of the U.S. 17th Airborne Division worked with British glider regiments to destroy German artillery positions. Varsity was the largest airborne operation ever conducted on one location in a single day, and it was the last one the Allies conducted during WWII.

Say hello to Airborne: a new #Battlefield V mode where you’ll parachute into the battlefield and work with your squad to destroy enemy artillery, or defend them and make sure the threat from above is dealt with. pic.twitter.com/Pw9j7isjFe

Whatever the case may be for its historical backdrop, Airborne could certainly be an exciting addition to Battlefield’s multiplayer. Now might be a good time to start learning some running cadences.