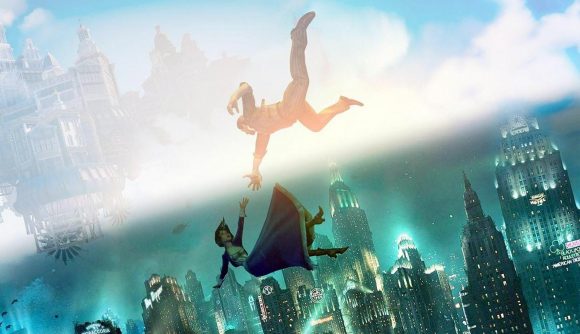 Netflix has revealed that a BioShock movie is in production, and the streaming service has the adaptation rights to the entire FPS game franchise. That includes BioShock Infinite, meaning Netflix could potentially incorporate the floating city of Columbia and characters like Elizabeth as well as the sunken city of Rapture if it so chooses.

This week Netflix announced that it is “partnering to produce a film adaptation of the renowned videogame franchise BioShock” along with publisher 2K/Take-Two Interactive. Official Twitter feed Netflix Geeked posted the reveal alongside the cover art for the original BioShock, which shows the city of Rapture alongside the game’s iconic Big Daddy and its Little Sister companion.

It seems like the BioShock Netflix movie will be based on Rapture and the more popular BioShock 1, which is more of a horror game. However, as spotted by Twitter user Supererogatory (via TheSixthAxis) Netflix has actually picked up the rights to the entire franchise – including Bioshock 2, Infinite, and the Rapture novel. This potentially means that Netflix could introduce elements from Infinite too if it wants, including the city of Columbia and characters such as Elizabeth and Booker – who did cross over into Rapture, of course.

Beyond this, Netflix hasn’t revealed much about the movie, including when it’ll appear. Studios such as Universal and Sony have been trying to get a BioShock movie going for years now, along with directors like Pirates of the Caribbean’s Gore Verbinski – who said back in 2017 that most of these attempts failed due to budget concerns, although he was optimistic the movie could still be made. Guess he was right.

Well damn @Netflix, a BioShock Movie…OK! By the way, the incredible folks at Cloud Chamber are developing the next BioShock game and their team is growing! Would you kindly check out their open positions? https://t.co/lcuFekKpgh

2K itself replied to the initial tweet with a reminder that BioShock 4 is on its way from developer Cloud Chamber, which will be an open-world game and is rumoured to have some similarities with Half-Life 3.