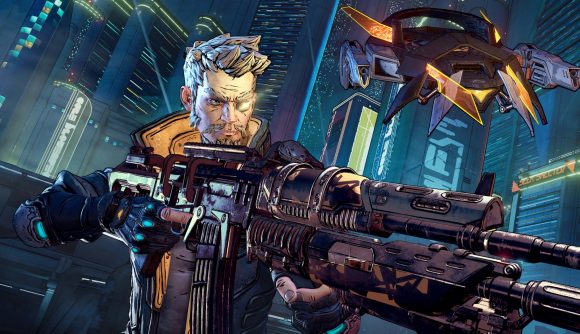 The topic of Borderlands 3 cross-play has come up a few times in pre-launch interviews, though there was never a concrete answer on whether or not the game would allow you to party up across platforms. Now, Gearbox boss Randy Pitchford says plans are definitely in motion to make it happen – just don’t expect cross-play to be there at the Borderlands 3 release date.

Tomorrow, July 16 at 7:00 PDT / 10:00 EDT / 15:00 BST, some sort of Borderlands 3 stream is happening under the title ‘Celebration of Togetherness.’ After a bit of speculation from the community, Pitchford tweets that the event “is awesome, but not about cross-play. But good news: We are committed to supporting cross-play for Borderlands 3 with our partners as soon as practicable after launch.“

The delay for the feature will occur as Gearbox works “closely with our partners to create a positive cross-play experience. We are committed to cross-play on as many platforms as possible.”

In response to one fan saying they hope cross-play between PC and console will happen, Pitchford says “me too!”

Borderlands 3 will launch as Epic exclusive, though that shouldn’t inhibit these plans – after all, Fortnite helped open the door for the wider cross-play adoption that we’re finally starting to see.

Exactly what platform-holder decisions factor into making cross-play happen remain pretty much a mystery. While Sony has historically been the most reticent to support it, Final Fantasy XIV cross-play has apparently been held up by some very specific Microsoft restrictions. Maybe someday we can just assume every game will support it, but not today.