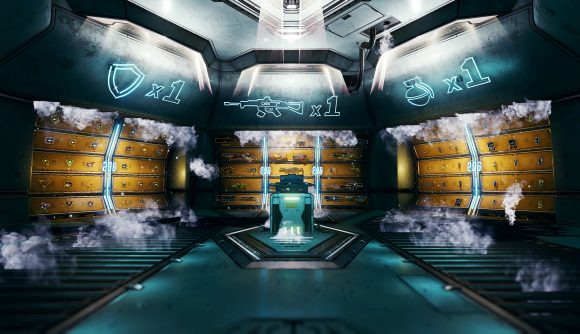 Everyone loves Borderlands 3’s golden keys – they open the Golden Chest outside Marcus’ gun shop on the Sanctuary III, which gives you a new powerful selection of random gear every time you peek inside. Well guess what? That’s all trash now. It’s garbage. The Borderlands 3 Director’s Cut, you see, is introducing a new resource to the FPS game in the form of diamond keys, which open something way better than that little shoebox full of pea shooters.

You’ll be able to earn diamond keys by leveling up Borderlands 3’s new Vault Cards, three of which come as part of the Director’s Cut add-on that’s now due to launch April 8. Each one has its own unique rewards, and they can be leveled up indefinitely after you’ve collected everything on them. That’s how you’ll eventually collect a diamond key.

Once you do, you’ll be able to unlock the Diamond Armory that can be found beneath the bridge on the Sanctuary III. Once activated, you’ll see shutters on each of three walls open, revealing exceptional weapons, shields, and grenades. You’ll have a limited amount of time to select one item from each wall, after which the shutters will close.

So yes, it’s essentially a bigger version of the golden chest you’ve known and loved for the past few Borderlands games.

There’s an extensive guide to how vault cards and diamond keys work over on the official Borderlands 3 site.