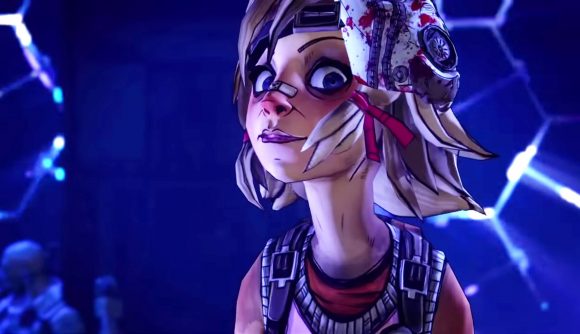 The Borderlands movie continues to move ahead with pre-production, and has now found an actor to play the FPS game series’ diminutive explosives expert. Tiny Tina will be played by American actor Ariana Greenblatt, who you may recognise from her role as young Gamora in Avengers: Infinity War.

Gearbox CEO and Borderlands co-creator Randy Pitchford announced the casting on Twitter. In addition to Infinity War, the 13-year-old Greenblatt has also starred in last year’s The One and Only Ivan and Love and Monsters. She’s played Daphne Diaz in the TV series Stuck in the Middle and appeared as a contestant on Dancing with the Stars: Juniors in 2018.

The character she’ll be playing, Tiny Tina, is an energetic (what character in Borderlands isn’t energetic?) pre-teen who has a penchant for explosions. Tina first appeared in Borderlands 2, when she enlisted the vault hunter’s help in finding rockets to use to blow up a Hyperion supply train that was carrying a vault key. In the Tiny Tina’s Assault on Dragon Keep DLC, Tina acts as the dungeon master in a Borderlands version of Dungeons & Dragons, and she’s returned to join the Vault Hunters once again in Borderlands 3.

In a whole world of characters who constantly yell, Tina stands out as either the most endearing or annoying of the bunch, depending on your perspective.

We don’t know yet when we can expect to see the Borderlands feature film – which Eli Roth is directing – in theatres, but we do know that the Borderlands 3 Director’s cut will be coming out March 18.