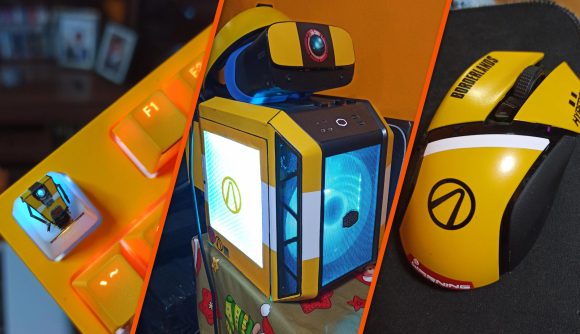 With Tales of the Borderlands 2 now officially in the works, what better way to celebrate than crafting your very own Borderlands gaming PC setup? From peripherals to a custom case, and a swanky CPU cooler to a painted Oculus Rift S, Reddit user Skindred77 has done just that, dipping the entire rig Claptrap’s signature yellow and white.

Every piece of the puzzle boasts fantastic details, whether it’s the Hyperion logo on the Razer Basilisk wireless gaming mouse, a custom-printed Claptrap escape key on the RK84 wireless gaming keyboard, or the VR headset that sits on the top of the system to look like the cycloptic mascot.

It’s not the beefiest PC under the hood, but packs enough of a punch to run any of the Borderlands games beyond their recommended specs. An AMD Ryzen 5 3600 gaming CPU sits at the heart of the system on top of an MSI B450i Gaming AC motherboard and chilled by a Darkflash Aigo AIO cooler that sports the Vault Hunter logo. An EVGA GTX 1660 Super graphics card handles the visuals, alongside 16GB of RAM, a 512GB SSD, and 1TB hard drive.

The PC case is a Cooler Master MasterCase H100, but Skindred77 hasn’t bowed to the constraints of the Mini-ITX chassis. Instead of opting for an SFX PSU, the Redditor mounts a full EVGA 600W power supply externally onto the back with yellow vinyl wrap, which they say both improves temperatures and gives some much-needed room. They also do away with the standard metal side panel in favour of a honeycomb mesh adorned with a 3D printed Borderlands logo.

There’s nothing quite like a themed setup to tie everything together. If you don’t have the time to sink into your own passion project, then keep an eye out for limited edition branded items, like MSI’s Evangelion stuff and SteelSeries’ Rainbow Six Siege merch. They’re few and far between but can scratch the same itch if nabbed before they run out of stock.