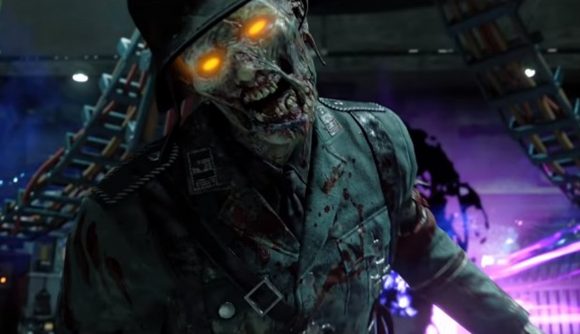 If you haven’t picked up Call of Duty: Black Ops – Cold War and have been curious about its new zombies mode, you’re in luck – starting this week, Cold War’s zombies mode will be free to play for seven days, giving you time to get a feel for Call of Duty at its weirdest.

This is the first time a Call of Duty zombies mode has been available to play for free. The event begins January 14 and runs until January 21, giving you a full week to experience co-op zombie perforation, Black Ops style.

Black Ops – Cold War’s zombies mode, Die Maschine, is set in an abandoned World War II laboratory, where a particle acceleration experiment has opened up a portal to some hell dimension where zombies live and play. You can explore and try to figure out how the hell this happened, or you can scrounge whatever gear you can and bail out early – either way, you’ll be shooting a lot of shambling zombies during your time in the multiplayer game.

It’s a wave-based shooter for up to four players, and it can be a bit disorienting at first – but hang with your team and keep putting bullets into zombies, and you’ll work it out in no time. If you’re feeling a bit more daring, you can try the Cranked mode, in which you’ll have to kill zombies faster and faster in order to keep from exploding.

Activision-Blizzard says you can download the Zombies trial now – just install the Battle.net launcher, hit download, and get ready for Thursday.

There are, of course, plenty of other excellent zombie games out there to play on PC, so bash that link if you’re interested in going toe-to-toe with the walking dead.