Call of Duty: Black Ops – Cold War zombies is one of the most expansive, accessible, and replayable zombies modes in Call of Duty’s illustrious undead history.

Treyarch promises that the new zombies experience will be fresh with hints of the familiar, including a new storyline set in the Dark Aether, an offshoot reality of the main zombies storylines. The first revealed map is set in the ’80s and is called Die Maschine. Fans of the zombies mode will immediately recognise its central building from the very first zombies map, Nacht der Untoten, but a few decades on and we’re visiting the site with a fresh perspective.

With fan-favourite perks, a reworked Pack-a-Punch system, a new loadout mechanic, and a whole new cast of characters to meet, there’s plenty of mysteries to uncover in Cold War zombies. So whether you’re here to catch up with the story, or you want to double-check that really was a Chopper Gunner killstreak in the trailer, here’s everything we know about one of the most popular zombie games of the year.

So, what is Dark Aether? We’re not going to get too tangled up in zombies lore, and that’s great because we don’t really have to in Dark Aether. The Dark Aesther is a new dimension that was opened up at the end of Black Ops 4’s final zombies map. It houses an ancient race of evil beings called the Apothicons, and anything that enters the Dark Aether is corrupted.

That final Black Ops 4 zombies map, Tag der Toten, all of the heroes from previous zombies storylines sacrificed themselves to plunge all of the many diverging zombies universes into the Dark Aether, thereby banishing the Apothicans and creating a new, singular reality. According to Treyarch’s blog post, they were half right.

In Die Maschine, the setup is that we are hunting down a powerful piece of tech – a World War II-era experiment known as Projekt Endstation – that threatens to start an arms race. We play as operators from multiplayer or the single-player campaign, but the crucial factor is that we fight for an agency called Requiem, which is a CIA-backed international response team led by Russian-American Grigori Weaver. Opposing Requiem is the Omega Group, a Soviet-led organization that aims to use and exploit Projekt Endstation.

Now, for zombies lore nerds, here is where things get really interesting. One of the Requiem contacts is a woman called Sam, who is almost certainly an adult Sam Maxis, which would mean that the Dark Aether story is a direct continuation of the Aether story. We know this because Samantha Maxis’ lullaby plays as Sam walks into the payphone during the Die Maschine intro cinematic. It’s also been spotted that the number she puts into the keypad spells Maxis. 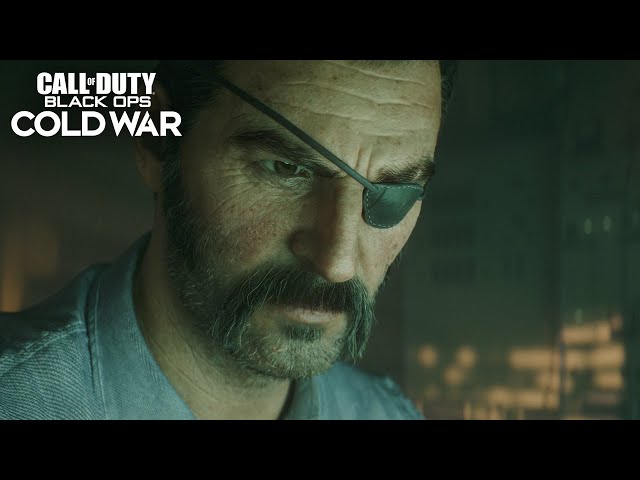 The first map is called Die Maschine, but interestingly, it’s clearly a revisited version of the very first zombies map, Nacht Der Untoten. Players spawn in the bright daylight outside of the bunker, fighting around a crash site in the woods before entering the bunker and exploring some underground levels.

The really interesting part of Die Maschine is that the map will change from daytime, to a dark, alternate reality that must represent the Dark Aether dimension. There are floating neon jellyfish, plumes of luminous dust, and half-tracks suspended in the sky.

We don’t appear to be getting a rambunctious crew of charismatic zombie-slaying warriors this time around. Instead, Treyarch says that “Instead of being locked to one of four characters, you’ll play as the operators from multiplayer… and even some familiar faces from the single-player campaign, including Russell Adler, Lawrence Sims, and even Sgt. Frank Woods himself.” 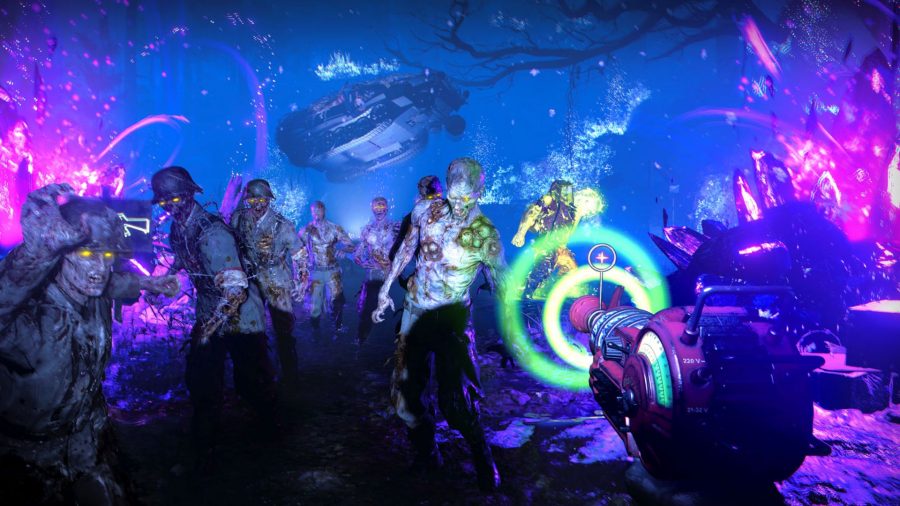 By now we all know pretty much what to expect from zombies gameplay. You’ll start with low-quality weapons against easy to kill zombies in a small area, collect points from killing those zombies, which you’ll use to access new areas and upgrade your kit. Each wave of zombies will increase in size, speed, and you’ll need to deal more damage to take down the undead the longer you survive, so upgrading your weapons and Call of Duty Cold War perks is the only way to survive.

Cold War zombies gameplay is sticking to that classic formula, with many beloved perks and mechanics like the mystery box and Pack-a-Punch machine returning, too. However, you can expect a few twists this time around.

Elemental Pop is a new perk to the Black Ops series, granting each bullet a small chance to activate a random base ammo mod.  Treyarch will release more perks specifically for zombies mode in post-launch seasons.

These will appear in perk machines as they always have in CoD zombies, but those machines are getting a visual redesign. Don’t worry, they’ll still have jingles for each perk.

What’s interesting is that for the first time these will be upgradable perks, adding more progression to a zombies match and gives some big benefits to some of the lesser used perks. Upgrading your perks requires Raw Aetherium Crystals, a resource found only through successful exfiltration, or by reaching milestone rounds within a game. You can also equip an unlimited number of perks, and all perks can be upgraded three times.

Here’s an example of the Elemental Pop Perk’s upgrade path:

This one’s small and not entirely gameplay related, but Cold War Zombies will be cross-gen and offer cross-play, which is a neat first for CoD zombies. We also have the added benefit that any hard work you put into grinding Call of Duty Cold War guns in multiplayer will reward you with the same attachments in zombies. In addition to cross-progression, you’ll also progress your battle pass through zombies, and earn zombies rewards from the battle pass.

Cold War zombies is getting loadouts for the first time in the series. Instead of entering the woods around Die Maschine with a pistol and a couple of mags, you can now start with a full loadout. However, this probably won’t make your life much easier the longer you get into a match, because of a new weapon rarity system. This, alongside the mystery box and Pack-a-Punch machines, means you’ll need to change to an improved version of your favourite firearms to keep up with the increasingly challenging waves of undead. 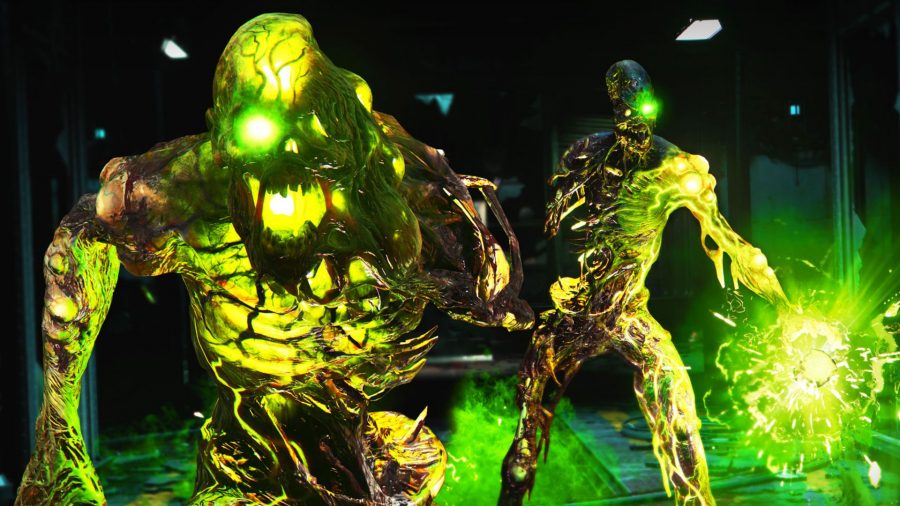 Cold War zombies equipment is broadly the same as it is in multiplayer, but you’ll also be able to add some more exotic tools to your kit as you progress through the map, including a grenade launcher, explosive crossbow, and even the Chopper Gunner scorestreak. Field upgrades have been given a zombies-twist to make them more effective against waves of enemies.

Here’s a list of the new field upgrades available in-game:

So you can actually survive Cold War zombies, which is another series first. If you decide to call your run short and you and your pals want to leave zombies then Exfil will add a challenging final few rounds in exchange for some lasting rewards. You can expect zombie spawns to be dialled up to 11 for these last rounds, so be ready.

This is Treyarch’s way of making all weapons viable even into the later waves of a run. Effectively, wall buys and mystery box weapons will have a range of rarities, with buffs to damage and other stats on rare weapons. This will ensure you need to change out your zombies loadout pretty early.

The mystery box is back in Cold War zombies, gifting players with powerful weapons to take down hordes of zombies. You can find mystery boxes dotted throughout the map at seven locations:

Opening a mystery box requires a hefty 950 zombie essence. These boxes can contain weapons of any rarity, including the overpowered DIE Shockwave and the classic Ray Gun.

Pack-a-Punch also returns, this time with a new name: The Forge. Upgrade your weapons up to three times and apply ammo mods to your Pack-a-Punch weapons – you can do this at any of the Pack-a-Punch machines.