The Call of Duty: Modern Warfare battle pass is on its fifth iteration with the Warzone Season 5 release date, promising plenty of shiny new Modern Warfare weapons like the ISO and AN94, which are free for all players to unlock. As ever, there are 100 tiers with 100 items and a new featured operator you’ll unlock instantly upon purchasing the battle pass. The new battle pass contains a free and a premium track, with very limited rewards on the free track. If you purchase the battle pass for 1000 CP (COD Points) then you’ll get access to the premium track, with all the cosmetics and the chance the earn back 1300 CP if you finish the pass.

Activision says that you earn battle pass tiers through a combination of factors, including how much time you put in, how much XP you earn, and the challenges you complete. With challenges contributing a huge amount of XP upon completion it seems that ultimately this is all about XP and time played.

In order to earn some of the new Warzone guns you’ll need to reach a certain tier in the battle pass. In order to ensure you’re not wasting time playing modes you don’t like or not tempted to go AFK for the sake of some easy progression, here’s how to level up your Modern Warfare battle pass fast.

How to level up the Modern Warfare battle pass fast

The fastest way to rank up you battle pass in Modern Warfare is to play core game modes, gain as much XP in these possible, and work through as many daily and officer challenges as possible.

The reason we suggest core modes is that these don’t take very long and a number of players report that there’s a progression bonus for completing matches, which you obviously won’t trigger as often in ground war. It’s up to you how much you want to factor challenges in, but our advice is to prioritise these if they’re easy, as the XP dumps will feed a lot of progression.

Any ribbons, camo challenges, or missions you finish will give you healthy boosts to your rank up times and you can often tick off several challenges in a single match if you focus on them. Shoot House, Rust, or Shipment 24/7 are great places to rack up lots of kills and XP fast, so that’s our best bet.

We obviously don’t recommend AFK tactics as it ruins the experience for others, but as XP is a significant factor here it’s worth flagging that AFK tricks won’t get players very far, which is good.

Trials are technically the most efficient way of leveling your Modern Warfare battle pass, but only if you’re confident that you can get three stars on them quickly. You’ll get a flat chunk of tier progression for completing Trials, which is roughly a tenth of a tier.

A lot of this information comes from YouTuber S0ur who has thoroughly tested the battle pass progression rates to verify Activision’s blog post. Check out their video below. 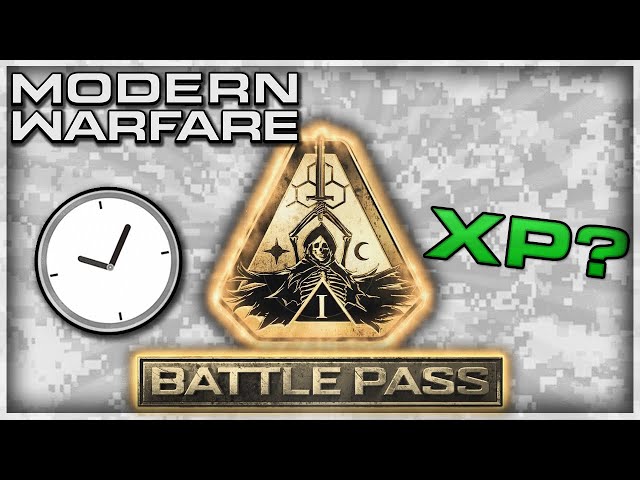 Finally, it’s worth flagging that double XP doesn’t appear to affect your battle pass progression at all. You earn some of these bonuses through activating the battle pass itself, so there’s no advantage for players who have bought the premium track of the battle pass system. Very occasionally, Activision will host a double battle pass XP weekend, but there’s no consistent schedule for this.

How to get more XP from Warzone

Warzone may be the only way to gain battle pass progress if you’re only playing the free-to-play battle royale mode, rather than multiplayer. Fortunately, Warzone is also one of the most efficient ways to gain XP in Modern Warfare as matches last for a long time and the main factor that dictates your progression rate is in-match time across all modes. So long as you’re staying alive for as long as possible, you should be able to rack up plenty of battle pass levels.

In addition to how long you survive for, Warzone also grants bonus XP for contracts, combat, opening loot crates, and placement. Contracts and placements are the most lucrative of the two, and if you’re aiming so live for a while then both of these work well with that playing style. Recon and Scavenger Warzone Contracts are the best of the two, but Scavenger wins out as each stash also boosts your loot XP bonus. Combat is good, but only if you’re likely to get 8+ kills every match, which isn’t easy in Warzone.

Plunder works similarly, but there’s also a cash collected bonus, which rewards a very aggressive style of play. Don’t forget that you can also gain huge sums of XP from completing Warzone missions from the main menu.

And there you have it, some quick tips on grinding through the Call of Duty: Modern Warfare battle pass as fast as possible. It really doesn’t look like there are any ways to break the system, although we’ll know soon enough if matches start filling with AFK players.