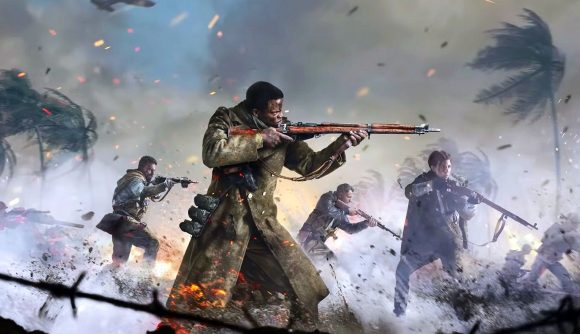 Ahead of the Call of Duty: Vanguard release date later this year, Sledgehammer Games and Activision have been giving folks the chance to playtest the FPS game through an open beta, now live for those who have got their pre-orders in. While fans are enjoying giving the new setting and destruction mechanics a whirl, there are also widespread reports emerging of audio and server-related issues that are hampering beta players’ experience of the game.

While the Call of Duty: Vanguard open beta doesn’t kick off for one and all until September 18, a quick look at the game’s subreddit reveals that those diving in early are experiencing significant issues with its sound quality. There are multiple reports of ‘muffled’ and poorly mixed audio which it seems is making it tricky to hear everything you need to and work out which direction gunshots are coming from – a pretty big concern given situational awareness is key in shooters.

Elsewhere, there are reports relating to server performance, with multiple beta players noting issues they’ve encountered with packet bursts – a connection issue that can make gameplay feel stuttery or laggy, and combat hard to read – which you can see a little of in action in this clip. There are also incidents of server and game crashes popping up from the community.

These concerns are reflected in some of our own experience of the open beta so far here at PCGamesN. For example, we’ve encountered packet bursts occurring frequently. Despite comfortably running at over 100fps, animations have appeared to slow down and frames from certain animations have disappeared entirely, making it very difficult to read the game.

Additionally, we’ve experienced a lot of crashes in joining and leaving matches, when new games began, and lobby exits, along with a generally high ping rate. Similarly, we encountered some crashes that caused action to freeze for several seconds before resuming as normal.

The latest intel drop on our blog breaks down:

On the audio front, we’ve also noted muffled sounds, especially for gunfire, which affects both the player’s weapon and enemy weapons. Deputy editor Jordan has noted that gunfire was nearly inaudible even when directly facing a foe who’s shooting.

It’s worth noting that developer Sledgehammer Games posted a blog update yesterday in which it notes it’s aware of some gameplay issues, including “volume and mixing issues”, as well as some visibility and other changes made since the game’s previous beta weekend. The studio’s audio team says that, while most of the changes to tackle these sound problems won’t be rolled out during the open beta, it’s “hard at work balancing everything for launch to fix bugs related to weapon audio, atmospheric audio, and more”. There’s no mention of the server-related issues players have been flagging in the post. We reached out to Activision about these reported issues but it didn’t have any comment to share at this time. We’ll update this story if we hear anything further.

💻 PC players: we are testing a fix for those unable to load into game. If you are experiencing errors, please send us error numbers.

Note, it is highly recommended for AMD GPU users to update drivers to version 21.9.1 which contains several stability improvements for Vanguard.

The Call of Duty: Vanguard open beta runs until September 20. If you’re keen to leave feedback for the devs on your experiences, you can find details on how to do this here. The game’s full release date is set for November 5, 2021.