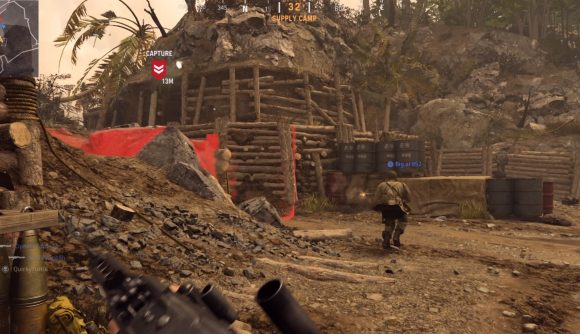 A small patch has arrived for Call of Duty: Vanguard, fixing some of the ongoing issues in the WW2 multiplayer game. While this patch doesn’t address all of the complaints players have lodged in the past month, it does make some welcome changes to map spawns and perks that will hopefully go toward making Season Two a smoother ride once it arrives after the two-week delay.

First up, the multiplayer map Paradise has gotten some attention, specifically to its spawns. Sledgehammer says it’s adjusted spawn points to address player feedback about spawning in right next to enemies, so hopefully that’ll be a rarer occurrence going forward. The team has also fixed a spawn point that would occasionally lead to players falling through the map – not the way to get off to a strong start in any match. Finally, some invisible collision has been added to Paradise to “prevent spawn trapping from one spawn point to the other.”

The Fortified perk works a bit differently as of this latest update. More accurately, perhaps, it protects against different attacks than it did before. Now, Fortified grants protection against mortar barrage, warmachine, flamenaut explosions, ammo box explosions, gammon bombs, and satchel charges. However, it no longer provides protection from the goliath, glide bombs, bombing runs, fire bombing runs, or direct hits from launcher weapons.

Cold Blooded has also been tweaked so that it now protects against dogs.

Some issues with Artifacts in Zombies mode have also been corrected. The Ring of Fire at tier II should no longer deal inconsistent damage, and any upgraded Ring of Fire won’t damage zombies above or below the level where it’s placed. It’s damage will now scale per level correctly, and you’ll no longer be able to charge Artifacts by getting kills with Artifacts.