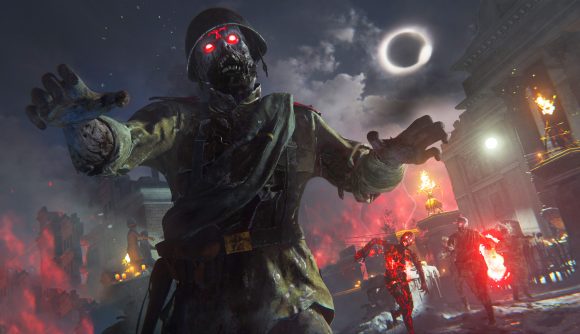 Zombies mode in Call of Duty: Vanguard will be getting the much-requested round-based maps fans have been clamouring for… eventually. The FPS game’s developer, Treyarch Studios, says it’s working on new round-based maps to add to Vanguard’s zombies mode, but they won’t be arriving until sometime after season three.

Call of Duty: Vanguard mixed things up with zombies mode when it arrived last year. Rather than surviving waves of undead, players travel through portals to various parts of the map to complete specific objectives. The next map, which Treyarch says is a “reimagining” of the Shi No Numa map that was featured in Call of Duty: World at War, Black Ops, and Black Ops III.

On Twitter, the studio says it’ll feature all-new quests, remastered Easter eggs, and new camos for Pack-a-Punch. Plus, we’ll be getting a new chapter of the Dark Aether narrative, because zombies explode much nicer when they’re filled up with juicy lore. However, Treyarch says this all “will take time to bring to the game,” and so current plans are to introduce it at some point after season three, which kicks off April 27.

That’s not all Treyarch is up to, however.

Our next Vanguard Zombies map will be a reimagining of “Shi No Numa” with all-new quests, a new area, new WW Quest, remastered EEs, new PaP Camos, classic traps, and a new Dark Aether narrative.

This will take time to bring to the game, currently planned for after Season Three.

Also in the works are new ranked play seasons and rewards, as ranked mode will leave beta at the start of season three. In Black Ops – Cold War, the Jungle multiplayer map is getting a remaster, and a new secret is on the way to Black Ops – Cold War zombies mode.

Treyarch also says it’s working on updates for Outbreak and Onslaught, plus the usual new weapons and cosmetics bundles for Black Ops – Cold War and Warzone.