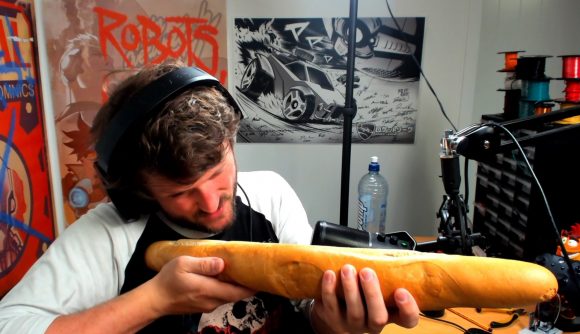 Headshots are the calling cards of the Call of Duty: Warzone elite, showcasing a practised skill and steely confidence that newbies can only dream of. But what about… breadshots? One Twitch streamer has been racking up kills in the battle royale game’s sprawling Verdansk map while armed only with a baguette that he wired up to function as a game controller.

Rudeism is a streamer and game designer based in New Zealand who proudly claims to be able to turn anything into a controller. He’s played The Legend of Zelda: Ocarina of Time using an actual ocarina and Crash Bandicoot with a sliced mango. His latest feat has been to wire up a crusty baguette with buttons, thumbsticks, and an accelerometer in order to go on the hunt in Warzone.

Why a baguette? “Because it’s gun-shaped, vaguely,” Rudeism explained as he streamed the process of building the controller. He used an MPU-6050 accelerometer and gyroscope combined with two thumbsticks and several buttons, each component protruding through the crust of a baguette he’d purchased at a local supermarket.

Using a sensitive button input placed near the back of the loaf, Rudeism can press the baguette into his shoulder to aim down sights, and the other buttons have all been cleverly arranged so he can hold the bread like it’s a rifle at the ready as he plays.

Here’s the yeasty controller in action:

We don’t recommend using food as game inputs unless you’re a trained professional – instead, have a look at the best game controller for PC right here. You also may be interested in reviewing the best XM4 loadout for Warzone, which will help make sure you’ve got your class setup tweaked for peak performance.