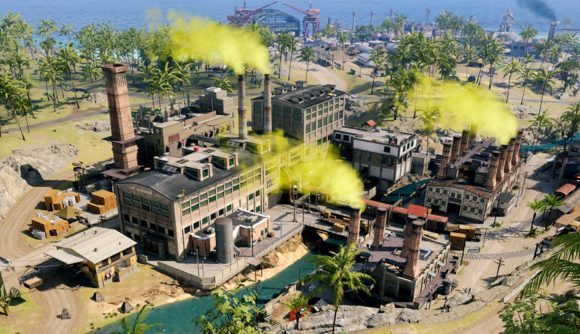 Following a minor delay, Call of Duty: Warzone has kicked off its second season. The battle royale game has gotten a substantial update to change things up for season two, with new places to explore on Caldera, new modes to try, and a new kind of plane in which to take to the unfriendly skies.

The Season Two patch also adds a new threat to the map in the form of NPC enemies. Soldiers now guard the entrances to some of the new locations on Caldera. The power plant has been replaced with a chemical factory, and there are guard towers on the perimeter staffed by unfriendly AI soldiers. These also are posted up near the entrances to some new underground chemical weapons research labs, where you’ll find things like gas masks and the new Nebula V ammo – these rounds can take down enemies, and will leave a cloud of poison gas behind when they do.

The new vehicle is a bomber plane, which does just what it says on the tin. If you can find a bomber, you’ll be able to take out enemy infantry and vehicles with impunity, and even destroy loadout drops.

The season two update also adds the new Caldera Clash mode, which features massive teams of 48 duking it out for supremacy on the island. In this mode, you can drop in with weapons from any of the last three chapters of Warzone and a field upgrade. The first team to score enough points will be crowned the victor.

Raven Software has the full patch notes with everything new that arrives with season two on its official site. Looks like it’s time for a bit of argy-bargy.