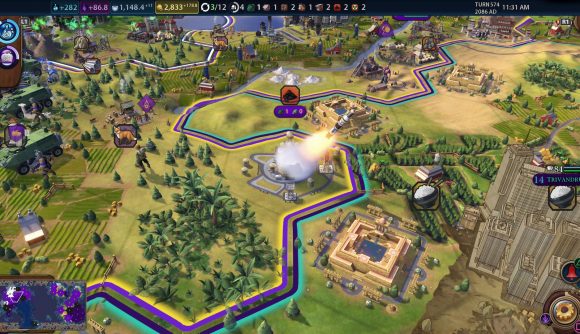 The much-anticipated February free update has arrived for Civilization VI. As we’ve reported, this patch adds a host of new stuff for the legendary 4X game, including a new Barbarian Clans mode and the ability to ban particularly unpleasant leaders. Firaxis has published the patch notes along with the patch itself, so now we can dig in to see exactly what’s new.

First of all, it’s worth pointing out that this big patch is available to everyone who owns Civilization VI – you don’t need the Frontier Pass or the expansions for the new content to work in your game. Just install the patch and fire up vanilla Civilization VI.

Barbarian Clans mode includes seven clan types, specifically the Flatland Clan, the Woodland Clan, the Hills Clan, the Rover Clan, the Chariot Clan, the Jungle Clan, and the Seafaring Clan. Each type uses its own set of preferred units and appears under distinct map conditions. Interestingly, the barbarian clans can also recruit unique units from civs that are not selected in the setup phase.

In Barbarian Clans, you’ll also have additional ways to interact with the barbarians – destroying them remains an option, but you can also raid their camps or hire their best military units. You can also pay ransom to them to free prisoners they’ve captured, bribe them to leave your territory, or incite them to attack another civ’s cities – all of these options cost gold and will advance the barbarian clan on their journey toward becoming a city-state.

The FREE February 2021 update is out now. Check out all the details below and enjoy!

There’s the usual list of tweaks and adjustments as well, which you can read about in the February update changelog on the official Civilization site. Check out our guide to the best civilisations in Civ 6 if you want a leg up on the competition.