To help you make the most of what Firaxis is calling the biggest expansion Civ has ever had, we’re presenting our findings in a series of detailed yet digestible guides. We’ll give an overview of each civ and its unique traits, followed by a practical guide to making the most of them.

If you like swimming in rivers of sweet, sweet moolah, there’s no civ better situated to facilitate that than Mali. For other new approaches to world domination, see our guides on the Ottomans, Incas, Maori, and Sweden.

Historically, Mali’s leader Mansa Musa is believed to have been possibly the richest man of all time – if you adjust for the portion of the world’s total wealth he owned at his peak net worth. Unsurprisingly, his bonuses revolve around raking in those fat stacks of cash and spending them generously. And you’ll have to. Mali’s economy is very lean when it comes to production power, so you’ll be reliant on buying a lot of things outright.

Leader: Mansa Musa – Sahel Merchants. For every Desert Plains tile in the origin city, international Trade Routes generate an extra +1 Gold. Every time you enter a Golden or Heroic Age, you gain an extra Trade Route slot that you get to keep for the rest of the game.

Unique Ability: Songs of the Jeli. Desert and Desert Hills tiles next to a City Center generate a bonus +1 Faith and +1 Food. Mines generate minus 1 Production, but in exchange they generate +4 Gold. on top of that, buildings for the unique Suguba district can be purchased with Faith. All buildings and units are built at a penalty of -30% Production.

Unique Unit: Mandekalu Cavalry. A replacement for the Medieval Era’s Knight, these guys are very slightly stronger in combat, make any Traders within four tiles immune to plundering, and grant you any destroyed unit’s base combat strength in Gold when they land the killing blow.

Unique District: Suguba. This replaces the Commercial Hub and only costs about half as much Production to build. On top of normal Commercial Hub bonuses, you’ll get a 20% discount every time you buy a unit or building with Faith or Gold in a city that has one.

Agenda: Lord of Mines. When you play against an AI Mansa Musa, he’ll focus on earning lots of Gold and respect other civs who do the same. Shocking, I know.

Mali is one of the strangest civs in Gathering Storm if we’re measuring how different it is to play. Production output will always be secondary to Gold and Faith, and you’ll be buying most of your units, buildings, and eventually a lot of your districts outright. Rather than having a set amount of Production that gets automatically put toward various projects every turn, think of the main driving force of Mali’s march through history as a pool of such points (in the form of Gold and Faith) that can be stored up and spent manually when and where you need them.

It can be tough to pick between Faith-centric governments like Theocracy and Gold-centric ones like Merchant Republic since both resources are important to you. Theocracy is probably better overall, since you’ll be spending your first six governor titles on one governor (Reyna) and buying most of your districts with Gold, minimizing Merchant Republic’s advantages.

While all victory types are attainable when you’re basically drowning in riches, Religious Victory is definitely the path that synergises best with Mali due to its unique ability and the discounts it receives on Faith purchases. Even if you’re not going for Religious Victory, you’re going to want to get a lot of Faith output going anyway so you can spend it on things that will help you conquer the world, or invent rock and roll, or get the World Congress to vote you the greatest bling master on Earth, or whatever it is you want to do.

Try to obtain a Pantheon as early as possible by rushing Astrology. Since settling in the desert is essential to take full advantage of Mali’s bonuses, you’ll definitely want to pick Desert Folklore for your Pantheon bonus and get a Holy Site up and running as soon as possible. Later on, founding a religion with either Tithe (if you’re playing tall), or Church Property (if you’re playing wide) will further suffuse you with cash from the faithful. You can even name your religion Cash Money like I did, to emphasize that the only true supreme force in the universe is that dolla dolla bill. 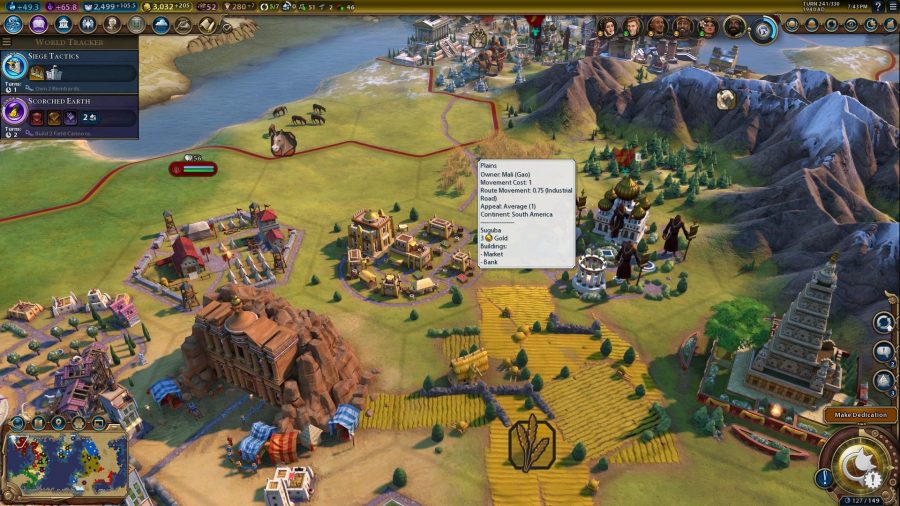 From there, you’re going to want to get Currency as early as possible and plop down a Suguba in just about every city you found. Remember that Gold and Faith are largely taking the place of Production here, so you can’t really have too much of either. Civics-wise, you want to beeline for the ones that give you Governor Titles. Once you get six of those, things get really crazy as you can unlock Reyna’s ability to buy entire districts with Gold. This is simply a brilliant synergy with Mali. By moving Reyna around intelligently, you’ll gain the luxury of almost being able to forget that Production is even a thing.

Whether or not you’re planning to go for an aggressive military strategy, taking advantage of the Mandekalu while you can is definitely a good idea. You can use them to hunt barbarians if you want to play it safe, or declare some aggressive wars if you’re feeling daring. You don’t even need to take any cities in these wars if you don’t want to. The whole point is to get your opponents to feed units into the meat grinder so your Mandekalu can claim their gold bounty and allow you to accelerate the growth of your homeland.

Related: The muted celebration of our Civ 6: Gathering Storm review

Later on, if you’ve made smart investments with your mountains of glittering treasure, you’ll be well situated to push for a Religious, Military, or Diplomatic Victory. For the warmongers out there, you can live by the mantra that anyone you fight will run out of blood before you run out of money, replenishing lost armies instantly with the signing of a check. If you want to ride the World Congress to the finish line, you’ll find that just about any politician can be bought as you bribe your way to the Diplomatic Favors you’ll need to manipulate the international community at a whim. Or, with your bonuses to Faith, you can focus on getting everyone in the world to worship the ground you make it rain on. This last strategy will probably require you to found or conquer a few more cities, as I found it was sometimes difficult to even spend all the Faith I was generating with a smaller number of Holy Sites to produce religious units from. 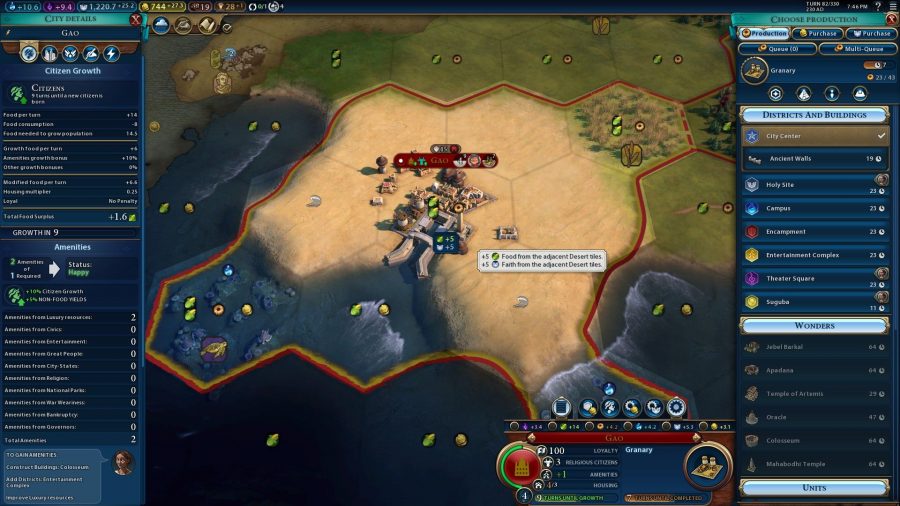 Culture and Science Victories aren’t out of the question. With Reyna’s help, you can finance all the Campuses and Theater Squares you want, after all. They just don’t synergize quite as nicely with your bonuses. Whatever you choose, one other nice little bonus in the late game is that you can afford to forgo fossil fuels and be a lot more carbon neutral than your neighbors, given that production from factories isn’t nearly as important to you.

Mali will take some getting used to, but I found them to be maybe my favourite new civ in Gathering Storm so far. There’s something so satisfying about being able to click a button and have almost anything I want right now, and never having to worry about lacking the funds to upgrade a unit or buy a tile I really need. The cash must flow.