Civilization VI’s new expansion is out now, and while we found a few of the headline systems to feel a little insubstantial, we loved the new civs, as you can read in our Civ 6: Gathering Storm review.

To help you make the most of some of the most distinctive and enjoyable civs in the legendary series to date, we’re writing a detailed guide for each. We’ll discuss each nation’s unique traits and offer a practical guide to making the most of them. If you’re a builder or a conservationist, you can check out our existing Inca or Maori guides, but if you want to attempt the new diplomatic victory, today’s subject is for you: Sweden.

Sweden and Canada are the only two civs that get any unique advantages toward the diplomatic victory. Under Kristina, Sweden is also a cultural powerhouse, which is handy since the cultural and diplomatic victories also have myriad intrinsic synergies. To make the most of Sweden, then, we suggest a hybrid approach: pursue the diplomatic victory with the help of Great People, prioritising the arts and religion for an easy pivot to the cultural victory if necessary. Read on to learn how.

Let’s start by counting the synergies between Kristina and her preferred victory types. First, the civics tree is how you develop your diplomacy: it unlocks more advanced governments, which is how you earn more city-state envoys, and you get one diplomatic favour per turn for each city-state of which you are suzerain. Civics also unlock alliances, each of which will get you another favour per turn.

Of no less importance, the Future Civic now gives 50 diplomatic favour (and a governor title) each time it’s completed. In a similar vein, the carbon recapture city project also grants 30 favour (and reduces your lifetime CO2 emissions by ten). It, too, unlocks through culture, with the new Global Warming Mitigation civic. You’ll want to repeat both of these as often and as quickly as you can, as soon as you can.

Thirdly, there’s Kristina. Theming bonuses are a big help to culture and tourism output, and they usually take a lot of time and energy to achieve, thanks to stubborn AIs who won’t hand over the Great Works you need. Filling your slots with any old junk is pretty easy by comparison, and the six extra slots from Kristina’s Bibliotheque are another huge boost. 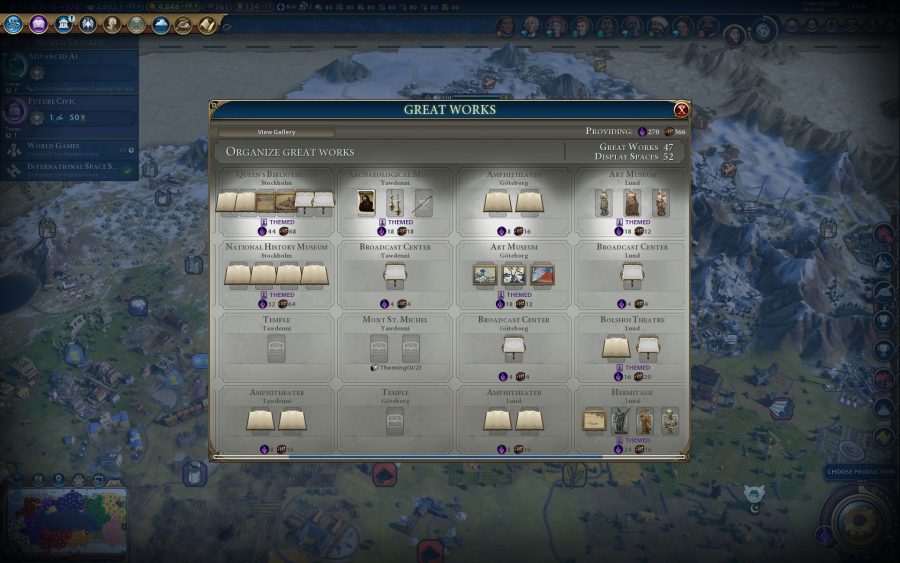 Last but far from least is the open-air museum, which is phenomenal. It’s no exaggeration to call it the linchpin of Sweden’s cultural push, just as the Maori’s is the Marae. If you can settle a city on all five eligible terrain types, each museum is worth ten culture (and tourism, after Flight). You’re limited to one per city, but you can get around this through the tried-and-true infinite city spam (ICS) strategy. More territory also means more national parks and ski/beach resorts, so don’t hesitate to shamelessly pump out weak cities that exist solely to claim land and host an open-air museum. It’s worth keeping an eye on loyalty – especially if you’re neighbours with someone like Eleanor, who can actively target your loyalty with her Great Works – but the open-air museum gives a handy boost to that, as well.

If you take this approach, you’ll want to nurture your first few cities by settling fertile land and setting up domestic trade. Faith is almost essential to a cultural victory in Civ VI as it’s how you recruit naturalists and rock bands, so your first couple of districts should be holy sites and commercial hubs. Theatre squares should absolutely come next, and hopefully you’re growing fast enough thanks to those domestic trade routes to set them up promptly.

The next step is to churn out settlers – the colonisation policy is recommended – and settle new terrain types. Once that’s done, just settle, using the appeal lens to prospect future resorts and national parks. Governors can keep new cities loyal until you can build open-air museums, and we suggest promoting Reyna the Financier when you can. Your orbital cities will likely be too weak to build districts, and given a few early commercial hubs, it’s nice to have the option to buy them. 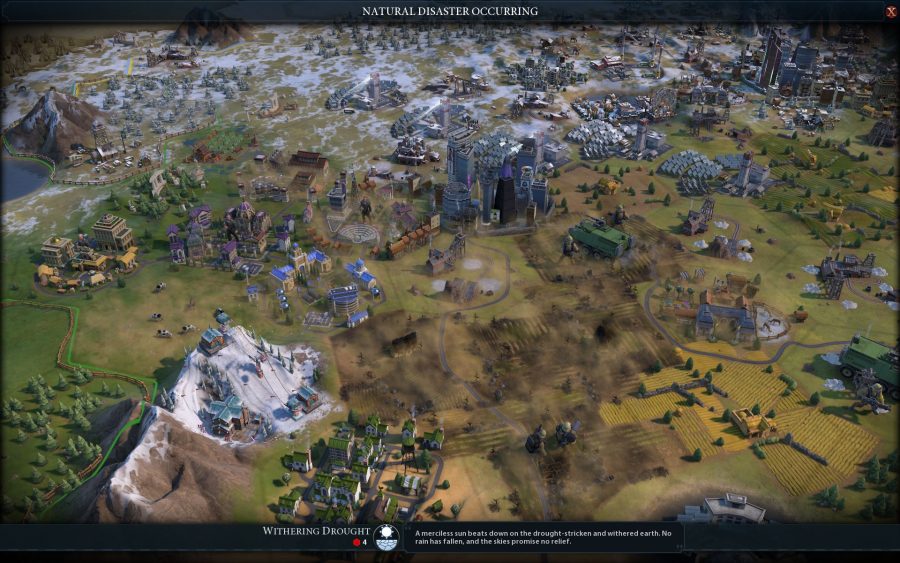 This aggressive expansion risks pissing off neighbours whose militaries may have outstripped yours while you’ve been focusing on culture and faith, so if you’ve got a bully on your borders, bump a campus or industrial zone up your build order. You’ll want a few of these anyway, whether to unlock the tourism benefits of Flight and Radio, bag an important Wonder (e.g. Apadana for envoys, Eiffel Tower for appeal and thus tourism), or to use your +1 scientist and engineer points to contest more Great People. It’s simply a question of juggling priorities.

But you have to play nice. Starting an unprovoked war is a surefire way to turn the world against you, which means it’ll be tough to get the alliances you need for the diplomatic victory. Conversely, provoking a war is a great way to earn sympathy, so feel free to strategically annoy your neighbours as long as you can fight them off.

If such an attack coincides with Caroleans, so much the better. Like the Pike and Shot, their base strength equals that of Musketmen, without the Niter requirement. Thanks to their unique attribute, they’re even better in practice, especially if you can limit their movement – each unspent movement point adds 3 combat strength (roughly 5% of their base, 55). Position them so they can attack enemies while moving as little as possible, say by putting them in cities or choke points. 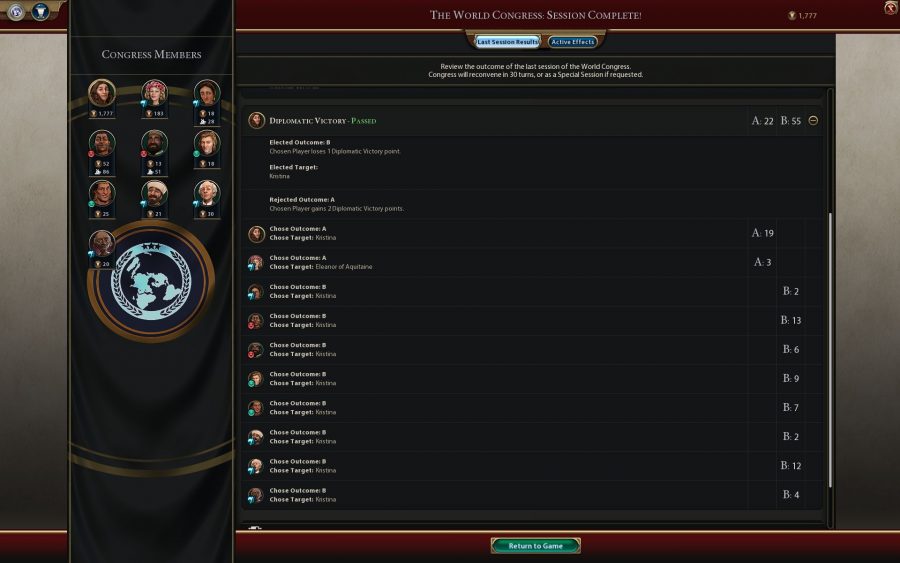 When the world enters the modern era, each regular World Congress session will have a motion for the diplomatic victory. A few things to bear in mind: other civs act individually as long as you can’t win, but they will gang up on you when you’re within one motion of victory. Because votes cost more favour as you add them to a motion, this means that they can still outvote you when they act collectively, even if you have more favour than the rest of the world combined.

This means that for every diplomatic victory motion other than the one that might give you the win, you should spend more favour voting for yourself than your nearest rival has. It’ll probably be more than you need, but not by much, and it’s worth it to guarantee the victory points. For the final motion, just invest all the favour you possibly can. There’s no downside, as any favour you spend on votes you don’t win is refunded, so it’ll build up over several motions until you can eventually overwhelm everyone.

What’s next? Check out these exciting upcoming PC games

There’s no such thing as too much favour, and no such time as ‘too early’ to start building it. Keep a couple of scouts in the field and seek out those city-states as soon as you can – the earlier you find them, the earlier you can claim suzerainty. As soon as any leader’s face turns green, make friends, and forge an alliance. Claim every Great Person you can. Maximise your culture so you can start repeating carbon recapture and Final Civic. This is how to win the diplomatic victory with Sweden, but if you miss it, you might be able to bag the cultural victory first. If you’re looking to go after a domination or religious victory instead, see our guide to the best Civ 6 leader for each victory type.