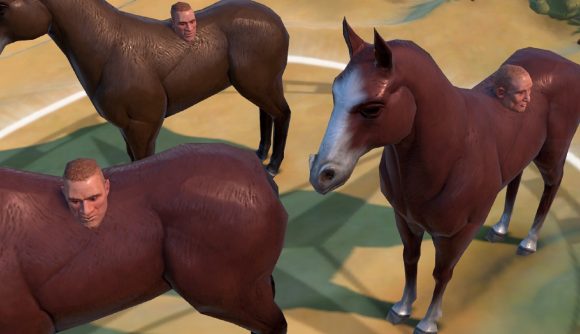 No game is ever truly free of visual glitches. If you spend an amount of time in any game’s community spaces, a favourite thing to share is amusing or notable visual hiccups that can occur. These trigger for a whole host of reasons, the most common of which being strange or unusual interactions between the game’s software and the hardware in your machine. Mods can also cause issues, depending on what they change.

Civilization VI, despite the fine-tuned polish that’s come from five years of active development, is no exception. I enjoy keeping an eye on spaces like the Civ subreddit – it’s thrown up everything from crazy tile yields, to the best worst (or worst best) city placement I’ve ever seen. It also provided this incredibly cursed image of a horseman unit.

As you can see, it’s missing quite a few things. Namely the armour, helmets, and weapons for the human riders. Oh, and their actual bodies. The horses are also missing their bridle gear. User AkihabaraAccept is not sure what might be causing the glitch. It could be mod related, but they report they’re not using any mods that interact with this unit specifically.

Here’s the image in full, if you don’t want to hop over to Reddit: 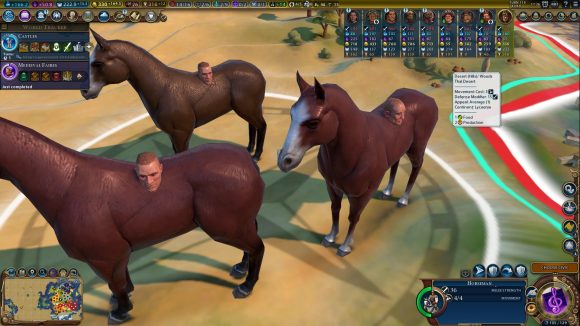 I’m not 100% sure what you’d call this new evolution in mounted warfare. The scientific guidance on the matter doesn’t cover this scenario. A ‘horse man head’ perhaps? At least no one is naked this time.

Civilization VI just received a major balance update in April to finish off the New Frontier season pass. We’re not sure what’s coming next, whether there’ll be more Civ 6 DLC, or if Firaxis is working on Civilization 7.