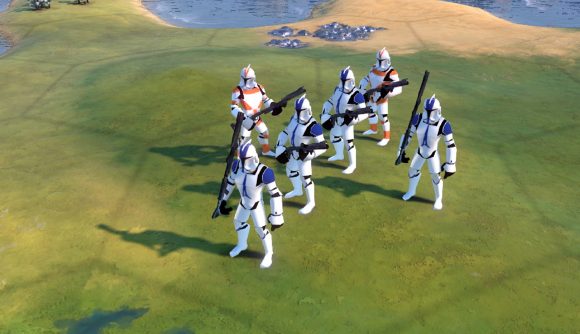 While Empire at War will always be the real best Star Wars game, Stellaris’ upcoming Nemesis expansion is trying very hard to claim that title through some of its new endgame mechanics. But now Civilization VI is here to tell everyone that, actually, it’s the best Star Wars game, and there’s even a mod to prove it.

Users Anargo19 and Newstang have released a new Civ 6 mod that adds the Galactic Republic civilisation to the game, with Chancellor Palpatine as its leader. There isn’t an animated leader screen for Palpatine, but the artwork used has been pulled from the Clone Wars cartoon, and it oddly works with the existing Civ 6 art style.

Clearly the new best Civilization 6 civ, the Galactic Republic possesses an ability called ‘Galactic Constitution’, which grants you an additional diplomatic policy slot for all government types. You also get +1 diplomatic favour per turn for each diplomatic slot in your current government type. The Republic’s unique unit is the ‘Clonetrooper Phase 1’, which replaces the Infantry available in the modern age. They act just like Japan’s Samurai units, and don’t take a penalty to their damage potential when they themselves take damage. There is even a custom 3D model, which looks pretty neat.

But what about ya boy Palpatine? His leader trait is ‘Order 66’, which grants all units +1 strength per city state he is suzerain of. You also get a +50% flanking bonus for 10 turns after a declaration of war. 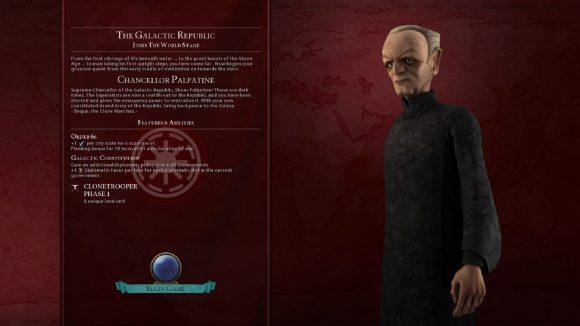 His agenda is ‘I am the senate’. He likes civilizations that are not competing for city state allegiance, and dislikes civs that have a large army. We might have to re-do our Civ 6 tier list to account for this new top tier addition.

The mod is available via the Steam Workshop. Note you will need the  Gathering Storm expansion to make use of the new Star Wars civilisation and leader. Don’t forget that a new DLC pack is landing next week!