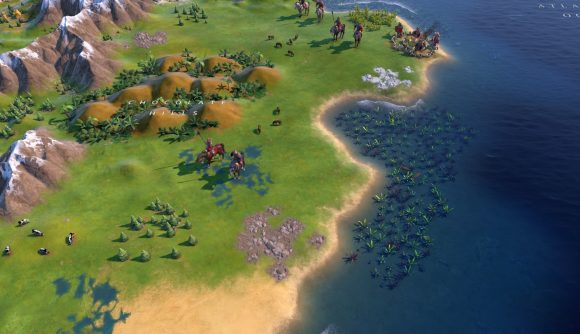 Ahh, the sea. Yup, there it is, that’s definitely the sea. Lots of water in the sea, isn’t there? There’s one major problem with the ocean in granddaddy 4X game Civilization VI, though – it’s a bit dull. One of Civilization’s most popular modders has decided its oceans needed a bit of a glow-up, and his latest mod does just that.

Sukritact’s Oceans mod adds enough new resources and features to the strategy game that it could be considered a whole new game mode. Install it, and you’ll find brand new coastal luxuries, which are different for each continent on the map. The oceans contain teeming kelp forests, which can speed up growth but will slow down your ships.

You’ll also be able to exploit new resources, including seals, squid, and coral, straight from the ocean. Caviar, a new luxury resource, adds +3 gold and will spawn (literally!) in lakes. New bonus resource squid provide +1 food, +1 gold, and will spawn on coastlines, in kelp, or reefs.

The mod makes some changes to some of Civilization VI’s improvements. The fishery governor tile improvement has been tweaked to account for the new focus on oceans, as have the synergies for the water park – for instance, you’ll get a +1 bonus amenity if you build a water park next to a kelp forest tile.

Head to the Steam Workshop to subscribe to the mod and start your new Life Aquatic. Sukritact has plenty of other terrific Civ 6 mods to try, including a version of InfoAddict’s popular Global Relations panel for Civ 5.