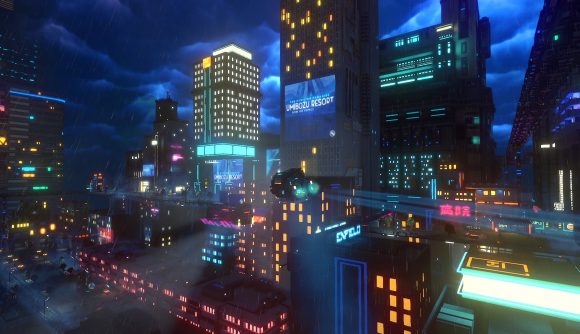 Yeah, we’re excited as heck for Cyberpunk 2077, and that means devouring every cyberpunk-themed game that hoves into view between now and the Cyberpunk 2077 release date. As Rich pointed out last month, one of those is Cloudpunk – a moody, voxel-based adventure game about a cab driver zipping around a neon-soaked city of the future.

Developer Ion Lands is currently working on a new first-person camera for Cloudpunk, which will make it that much closer to Cyberpunk 2077 – although Cloudpunk is admittedly a different sort of game, one that isn’t focused quite so much on perforating enemies with a variety of high-powered firearms and knives.

But the crunchy, jazzy neon dystopia is still there, along with many of the details we’ve come to expect since Blade Runner – the lights, the linguistic melting pot, and the disparity between the obscenely wealthy and the desperately poor. Seeing Cloudpunk’s voxelized version of all this in first-person works remarkably well, which is a testament to how Ion Lands has created Cloudpunk’s environments.

Studio head Marko Dieckmann says the feature is currently in Cloudpunk’s beta branch, but will be making its way to the main branch shortly. Players should be aware, though, that they’re likely to notice flaws and seams in the environments – they weren’t designed with first-person perspective in mind, so you’re liable to see behind the curtain a bit.

The camera also doesn’t yet work in vehicles, as Dieckmann explains that the team would have to create actual vehicle interiors for that to be effective.