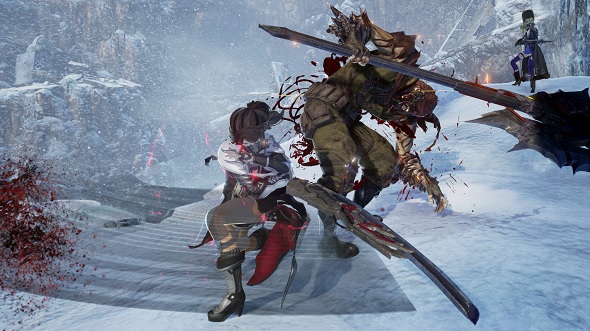 If Dark Souls’ upcoming remaster isn’t quite lighting your world on fire, you might have your sights set on Bandai Namco’s Code Vein, a game that asks and answers the question, “What if Bloodborne, but anime?”

Code Vein is just one part of Bandai Namco’s plan to “aggressively” create new IP in the coming year.

A new trailer (above) shows off a bit more of Code Vein’s moment-to-moment combat, and it’s abundantly clear – as if it wasn’t already – that it’s sticking close to the Soulsbourne formula. It’s a quick video, and for much of the runtime it’s showing us some fairly standard chains of attacks and charge moves.

But there are a couple interesting new details as well. An AI companion is shown drawing aggro with a ranged attack at 0:38, and it makes me wonder whether party behavior is something you’ll be able to tweak outside of battle.

The main character is also able to transform his cape into a pair of twin wolf spirits, which you can see at 0:13 and again at 0:26. They look a bit like the God Arcs from God Eater, although here it seems as though they have both offensive and defensive capabilities.

We still don’t have a firm release date for Code Vein – it’s set to come out sometime late this year.