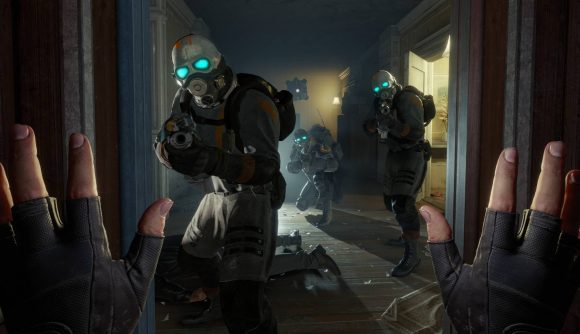 For the first time in well over a decade, today we can celebrate a new foray into the Half-Life universe. That’s right – the Half-Life: Alyx release date is here, which means fans of Valve’s long-running FPS games series can once again get stuck into fighting the Combine, this time in glorious VR. And it looks like the developer is celebrating the game’s arrival in another of its titles, too – Counter-Strike: Global Offensive has a bunch of Alyx-themed in-game goodies up for grabs.

As announced on the CS:GO blog, there’s a raft of stickers, collectable pins, and patches inspired by both the new game and the Half-Life series, now available for purchase in the in-game store. The iconic Lambda logo featured across the Half-Life games makes several appearances, sometimes with the classic orange-black combination, but there are a few more colourful options, too.

There are, of course, also headcrab stickers on offer – including one that says ‘big hugs!’ (shudder) – as well as some of Alyx, masks, other logos, and even one of that scientist, which proclaims: ‘Greetings!’

But that’s not all – the post also reveals if players have “purchased Valve Index hardware prior to Alyx’s release, you’ll receive a genuine version of the Alyx pin from the new collection, as well as an exclusive Half-Life: Alyx music kit.” Sweet.