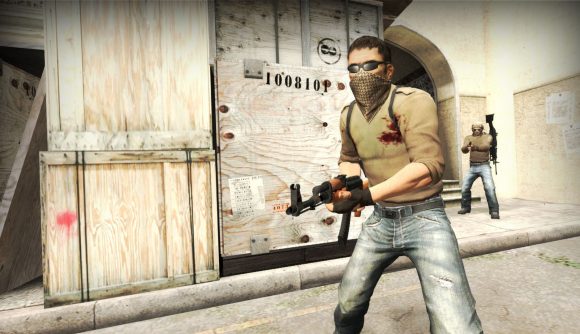 While some players might be keen to see an official remake of CS:GO map Mirage hit the FPS game one day, one fan has decided to remake one of its key locations themselves. CS:GO fan Dooodaaad has reimagined the ‘B short’ portion the multiplayer game’s Mirage map, and it looks pretty incredible.

“While we wait for Valve to remake Mirage, I figured I’d give it a try,” the creator says. “Here’s what I did with catwalk!” As you can see in some before-and-after comparison shots they’ve posted on Imgur here, the difference is pretty astonishing. The previously minimalist street scene has been partially remodelled, with the building corner in the section’s centre turned into a rustic brick shelter with decorative awning, hanging plant, and café table with chairs. There’s also a scooter tucked away in the shadows.

As for the building ahead, its previously bare façade has been given a bit of an overhaul, with decorative new windows that look like those seen in Dust 2 and a gate entrance. While it looks very different from live Mirage, the creator says they “remade the basic geometry from the original level exactly,” but “just decorated it differently”.

Sadly, it looks like we won’t see a total fan-made overhaul of Mirage as Dooodaaad says they probably won’t remake the whole map, though they may “re-do B” as well as this “catwalk” portion. Plus, they add it’s “definitely not competitively viable” and that they just focussed on the visual changes for their creation.

While we wait for Valve to remake Mirage, I figured I’d give it a try. Here’s what I did with catwalk! from GlobalOffensive

The map adjustment isn’t published to the game’s Steam workshop, but for now you can drool over the remake above, and hopefully we’ll see the creator’s reimagining of Mirage’s B section in the not-too-distant future. Check out our CS:GO smokes and CS:GO tips guides at those links if you’re keen for some more pointers ahead of your next round.