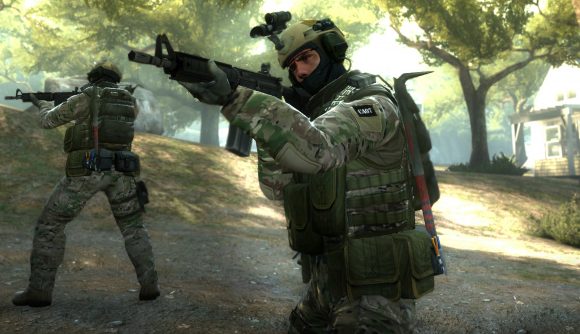 ‘Bloodsport’ is a popular line of fan-made Counter-Strike: Global Offensive weapon skins which has been in the works for years. While some weapons, such as the SCAR-20, AK-47, and MP7 have been available in the game for a long while, the creator has now announced that nearly half a decade on, they’ve finally finished the complete skin line.

“After almost five years I finally finished the Bloodsport design on all the CS:GO weapons,” creator Slimeface announces on the FPS game’s subreddit. “Let me know what you think.” The fan-made skin line features “white logo decals over a red and black hydrographic”, as its CS:GO Fandom page details, and is themed on “racing and extreme sports sponsors”, as the creator explains. You can check out the full range of weapons given the new makeover – from snipers and handguns to assault rifles and submachine guns – below.

The competed workshop skin line has drawn a very positive response from the multiplayer game’s community on Reddit so far, with over 1.2k upvotes as of writing, and tons of replies praising how the style looks across the weapon types. Some have also been expressing their hope that the skins gets implemented into the main game at some point, as some community creations do.

Some users note that the line’s existing skins can be a little pricey in real-world money (as this AK-47 example on the CS:GO Steam community market shows), but if the weapons do make it into the game at some point, perhaps we could potentially see those figures drop. Check the now complete Bloodsport skin line below:

Bloodsport everything, I finally finished them all! Which one is your favourite? from GlobalOffensive

If you’re a fan of Valve’s shooter, check out our CS:GO tips and CS:GO smokes guides for some handy pointers.