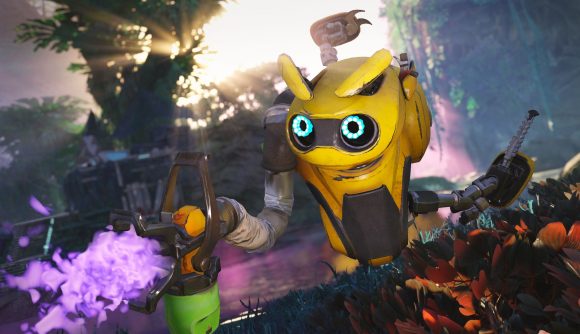 Crucible, which launched and began its inaugural ‘pre-season’ May 20, is taking the unusual step of “unreleasing” and moving to a closed beta status. Amazon’s free-to-play team shooter will enter closed beta July 1 as the developers focus on collecting player feedback and refocusing their efforts.

The news comes a few weeks after Crucible announced it was removing two of its three game modes, leaving only the most popular, Heart of the Hives. That move did little to staunch the flow of players leaving the game, unfortunately: after an initial peak of more than 25,000, Crucible’s peak concurrent player count has dwindled over the course of June down to only a couple hundred per day.

“We’ll continue following the roadmap we laid out previous and working on map, combat, and system changes to improve the Heart of the Hives experience as well as implementing other improvements based on your feedback and what we think the game needs in order to thrive,” writes Crucible franchise lead Colin Johanson in a blog post explaining the move to closed beta.

Crucible isn’t going away, however. For the players enjoying their time with Crucible, almost nothing is going to change: everyone who has already played the game will still have access to it while it’s in closed beta, and Crucible will be accessible 24 hours a day, seven days a week. However, new players will not be able to access the game or set up new accounts at first, and will eventually have to sign up for the beta at the Crucible’s official site.

Johansen says the team will be scheduling time throughout the week to play the game alongside the community and encourage feedback from players. Relentless is also setting up a player council made up of players that range from casual to hardcore who will work with the studio through the beta.

In the meantime, if Crucible is something you’ve been meaning to try, you’ll need to sign up before 17:00 BST / 12:00 EDT / 9:00 PDT July 1, otherwise you’ll need to wait for an invite. You can also check out our Crucible review if you’d like to know more about how the game felt at launch.