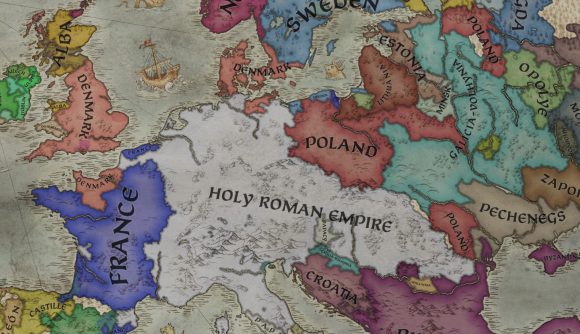 Last month’s big ‘Corvus’ patch for grand strategy game Crusader Kings III introduced a host of free new features alongside the Northern Lords flavour pack, but it also had a surprising effect: mods that had allowed characters to take same-sex concubines stopped working. Paradox says this functionality will be returning soon, along with support for same-sex marriage mods, in upcoming patches.

In the latest developer diary, Paradox explains that same-sex concubinage was “unintentionally possible” to mod into the game prior to the 1.3 patch, but that due to some of Crusader Kings III’s underlying code, this could lead to a “variety of errors.” That led the team to restrict the functionality in patch 1.3 while it worked out a solution.

“Since then, we’ve made changes to properly support same-sex concubinage, and it will come alongside other modding improvements in 1.3.X,” the dev diary reads. “Further, we plan to support same-sex marriage for mods in 1.4. Due to larger technical risks surrounding it, it was not feasible to include that in 1.3.X; we need more time to test it to ensure that this support does not introduce bugs in the vanilla game.”

The issue stems from how Crusader Kings III handles familial relationships, dynasties, and inheritance – all that stuff is core to how it works, and if some of the foundational game logic doesn’t account for the possibility of same-sex unions, then it’s easy to see how problems could arise, particularly with how the AI handles LGBT characters and their decisions.

Fortunately, it sounds as though Paradox is busily working through those possibilities as we speak, and so mods will once again be able to add same-sex marriages in once the 1.4 patch arrives for Crusader Kings III.