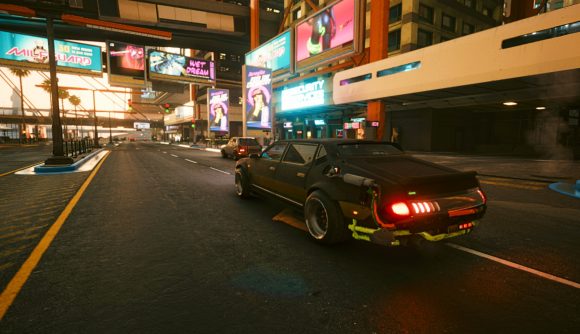 Patch 1.3 is on the way for troubled RPG game Cyberpunk 2077, and it looks like Night City will finally be getting easier to navigate in a car. The GPS system, which has been ridiculed in memes for being the cause of countless vehicular accidents, is getting an overhaul – and a few other welcome changes are inbound as well.

The latest ‘development insight’ post from CD Projekt Red hints at a few coming changes to Cyberpunk 2077, and the GPS overhaul is at the top of the list. These posts are written as in-universe news broadcasts, so it can be a little tricky to suss out exactly what’s on the way. However, a real-world CD Projekt Red programmer is quoted as well, saying “With the new minimap system software update you are able to see more and navigate better. Drive fast, drive safe.”

That’ll be a relief for anyone who’s gotten frustrated with some of Cyberpunk 2077’s driving missions, in which your GPS will frequently indicate turns far too late for you to be able to perform them without smashing into level geometry, other vehicles, and hapless civilians. The update doesn’t explain exactly what’s changing, but the safe bet is likely that the minimap will be a bit smarter about zooming out when you’re traveling at high speeds (which, if you’re us, is ‘constantly’).

Another change coming in Patch 1.3 is an update to the interface at Clouds, where at one point in the story you’ll have to choose to have an encounter with either a male or female ‘doll’. Angel is the masculine doll, and Skye is the feminine doll, and the choice makes no difference to the outcome of the quest. However, it’s easy to forget who is who by the time the system asks you to make your choice, and it seems like that’s getting addressed in the next patch.

What's new in Night City? N54 News has uncovered what will soon change in the City of Dreams. Our experts included an analysis to keep you informed about the upcoming developments.

I'm Gillean Jordan and here's what I have for you today: https://t.co/i6gMbGYDRU pic.twitter.com/i5Uzdbmw6z

Changes are also coming to the perk and cyberware systems, although this may be the vaguest part of the post. It mentions the introduction of ‘personal coaches,’ which seems to be a guide for investing the perk points you earn through gaining experience levels. There’s also mention of a market crash on shards, which suggests that upgrades at Ripperdoc locations are going to be cheaper. Whatever the specifics may be, it seems CD Projekt Red hopes to make build experimentation easier, safer, and more affordable.

Despite its issues, we still think Cyberpunk 2077 is a pretty good game, and we’ll be looking forward to seeing these new features go live. We don’t know yet when Patch 1.3 will be arriving, but CD Projekt Red has a livestream scheduled for August 17 that will provide additional details. It’ll be airing on its Twitch channel at 9 a.m. PDT / 12 p.m. EDT / 5 p.m. BST.