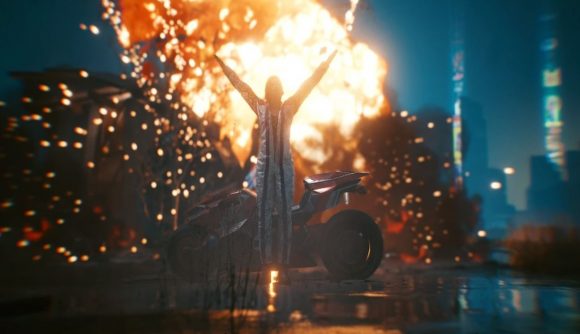 The official Cyberpunk 2077 Twitter account has released a trailer for the photo mode the upcoming game will feature, and it’s very in-depth. The trailer is just over two minutes long and shows that you can change your characters facial expression, pose, and size, as well as change the effects and depth of field in the photo, plus much, much more.

It is a well-known fact that coolest of the cool don’t look back at explosions, and that is no exception in Cyberpunk 2077. At around the midpoint of the trailer, you can see a photo edit in process where a character is performing the V-pose in front of a huge explosion with a pretty happy expression on their face. Show-off.

The Cyberpunk 2077 release date finally lands on December 10, so fans have just a little over a week to wait before they can show off their carefully customised characters in photo mode. If you would like to know more about the hotly anticipated title, we have created some handy guides on Cyberpunk 2077 life paths, romances, and weapons.

You can check out the tweet and full two-minute photo mode video below if you want to see more.

Strike a pose and capture your favourite moments in Night City with #Cyberpunk2077 Photo Mode! See it in action in our newest video.
Ready? Say cheese!📸 pic.twitter.com/3bqAUsJKzi

If you are looking for something else to play in the meantime, take a look at our list of the best open-world games.