There are many romance options in Cyberpunk 2077, but you might miss your golden opportunity if you aren’t paying close attention. Night City is filled with augmented beauties, so if you want some of that first-person action, you’re going to have to romance someone. If you want to romance people without the awkward first-person cutscenes, you can always turn the Cyberpunk 2077 nudity on or off in the menu.

Cyberpunk 2077 features long-term relationship options with their own entire plotlines, Witcher 3-style – and there are more than just heterosexual opportunities on offer. As with all romantic encounters in the game, you’ll know when you’re about to seal the deal when a dialogue option with pursed lips appears. A number of these romances will spoil some of the quests in Cyberpunk, so tread carefully.

Whether your goal is to settle down with your perfect partner, or you’re looking to hook up with as many people as possible, Cyberpunk 2077 will let you run wild, so let’s take a look at all the romances we’ve discovered so far, but the night is still young, so we’ll be sure to update this guide with new romances as and when we find them. 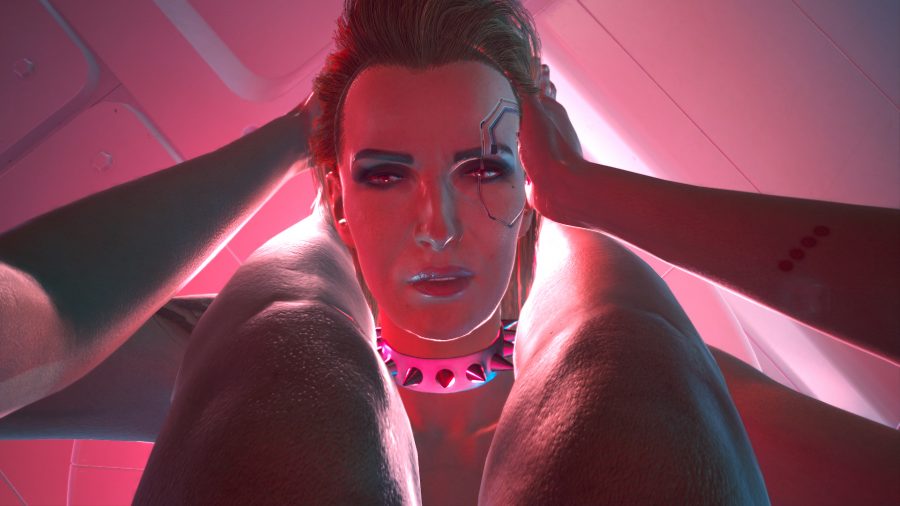 Romancing Meredith Stout is no easy task, however, there are steps you can take to sway the ruthless Corpo in your favour. Meredith needs some help dealing with the Maelstrom gang during The Pickup quest. If you speak to Meredith before dealing with Maelstrom, she’ll give you her credit chip. Following the Disasterpiece quest, Meredith will message you saying “Militech played out as I hoped”, opening up the option to work with her again. Reply to her asking to see her ink and she’ll invite you to the No-Tell Motel. Job done. 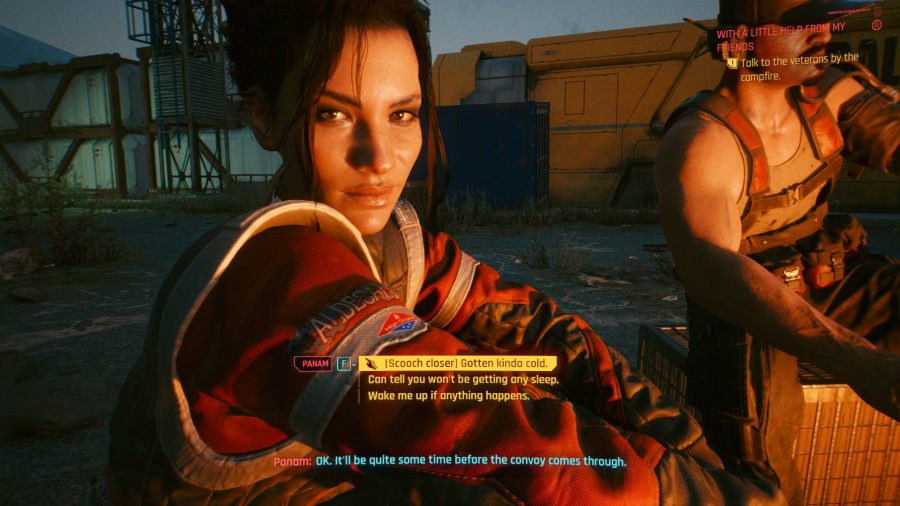 Panam Palmer, the Nomad mercenary, can be a romance option for male V, if you put in the effort. During Act Two, Johnny will suggest you head to the Afterlife club. The club’s owner, Rogue, will put you in touch with Panam. This will unlock a Nomad questline where you’ll have the opportunity to work closely with Panam on a number of missions.

Agree to help Panam go after Nash instead of dealing with Hellman first, then text her back after the Life During Wartime quest by taking an interest in her problems. After some time passes, accept Panam’s request to help rescue Saul. Once you’ve found Saul and escaped from the Wraiths, eventually you’ll have the chance to side with Panam in a conversation. When Saul goes to bed, Panam will get comfortable with you on the sofa, but don’t initiate anything just yet – choose the middle option (“you decide”) when she asks what you had in mind.

After completing more Act Two main quests, Panam will call you again asking for help. Following these quests, you’ll make your way to a train station where Panam will ask you questions at the top of the tower. From this point onwards, you should be able to make advances towards Panam without her brushing you off. The last quest, Queen of the Highway, sees you and Panam taking the Nomad’s brand new tank for a spin. The dialogue option marked with the pursed lips will allow you to conclude this romance option. 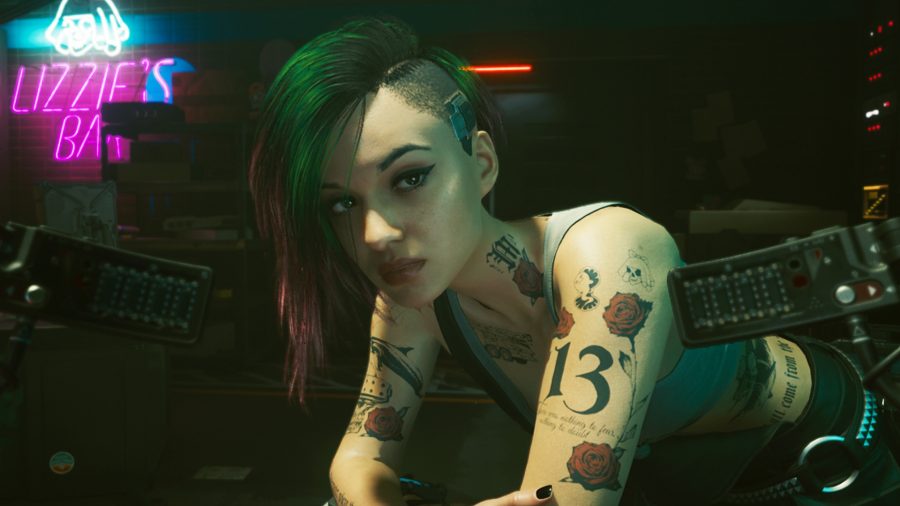 To romance the braindance expert, Judy Alvarez, you’ll need to be female V. During Act Two, you’ll receive the Automatic Love quest to find Evelyn Parker. Judy is close to Evelyn, so it’s important to keep her in the loop by phoning her when the opportunity arises. You’ll have the opportunity to contact Judy in the next few missions after Automatic Love, including The Space In Between, Disasterpiece, and Double Life. Keep her informed at all times, but be careful not to annoy her.

Here’s where things start to get intense – if you mess up any of the options here, your chance to romance Judy is over. During the Pisces quest, you have to refuse to help Maiko, or at the very least turn down her payment. The opportunity arises to ask Judy what she thinks about the situation before being forced to make a decision, be sure to consult her beforehand.

You’ll have the chance to romance at the end of the Pyramid Song quest. Accept Judy’s invitation and then offer to spend the night together. You don’t have to only spend the night with Judy, however, as you do have the option of starting a long-term relationship with her. If you want to pursue this, be sure to kiss Judy in the bathroom and speak to her on the pier outside in the morning. When she asks you how you felt about last night, answer her by saying “the beginning of something amazing.” 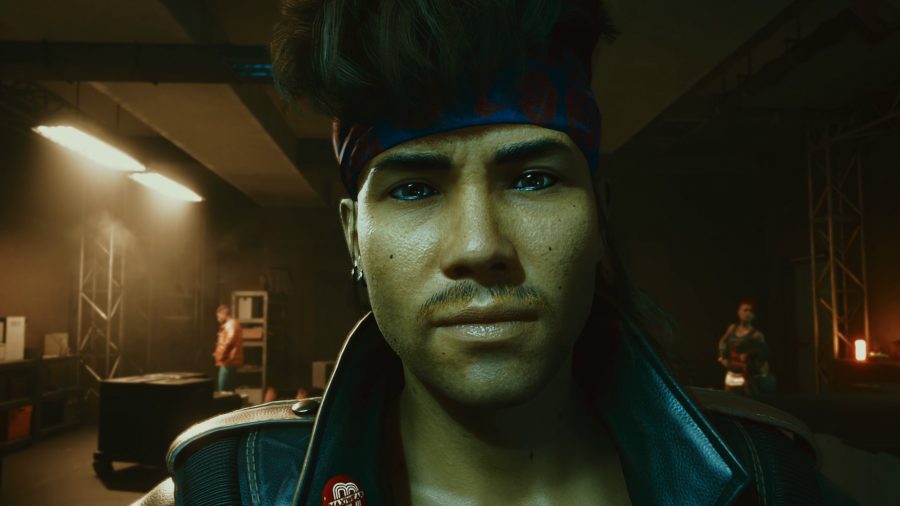 To romance the lead guitarist of Samurai, Kerry Eurodyne, you’ll need to be male V. There are opportunities to flirt and kiss Kerry prior to the Boat Drinks quest, but they aren’t necessary to romance him. During Boat Drinks, Kerry will ask for your help to get inside the yacht, giving you the option to kiss him. After this scene, you’ll end up on the beach with Kerry. From this point onwards, all you need to say to Kerry is that you want to be in a relationship with him. 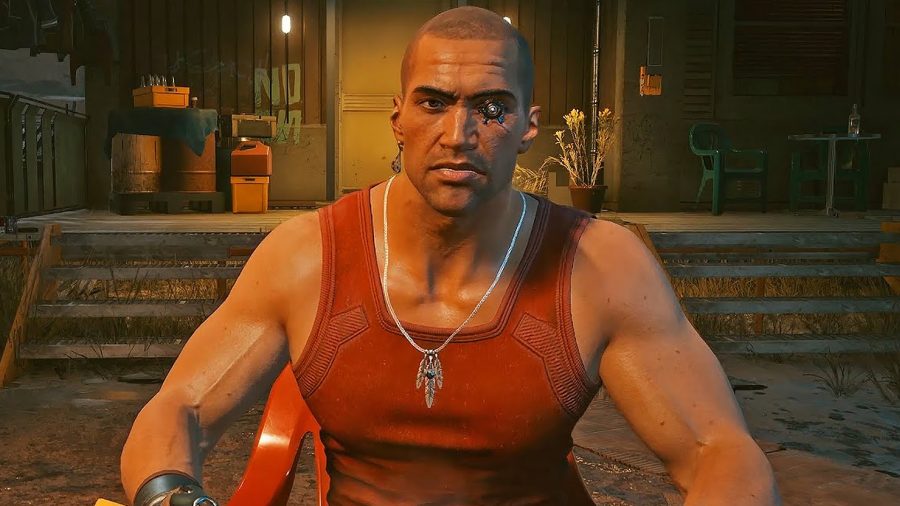 If you want to romance the former NCPD officer, River Ward, this option is only available to female V. Once you meet River during I Fought The Law quest, a new quest named The Hunt will open up the opportunity for romance. The key to swaying River is to get the best outcome in this quest, this means ensuring you find Randy alive. If you make an incorrect guess after watching the braindances, this can result in both River and Randy dying.

After you save Randy, you’ll need to either convince River that vengeance isn’t the best option, or help him continue his pursuit. If you selected the “count me out” option, you won’t have the chance to romance him. The next quest, Following The River, is a simple mission that ends with a conversation on top of a water tower. From this point it’s all smooth sailing, simply kiss River when given the choice, and you can take things further by telling him “I feel good around you.”

They’re all the Cyberpunk 2077 romance options we’ve found so far. If we run into any more romance options in Night City, we’ll be sure to update this guide. If you’re trying to find everything the game has to offer, definitely check out our Cyberpunk 2077 iconic weapons guide to ensure you don’t miss out on any of these powerful guns.