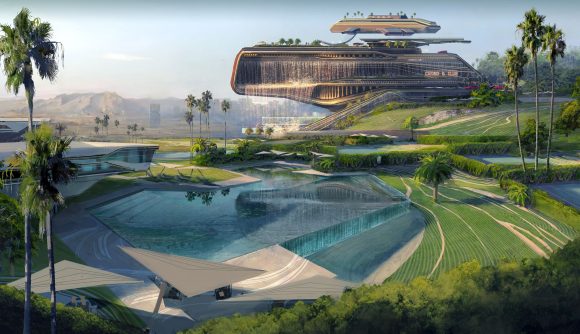 We’ve already got some idea of what the Cyberpunk 2077 map will look like, thanks to combination of Cyberpunk 2077 gameplay footage, teases from developer CD Projekt Red, and eagle-eyed fans’ efforts to decipher what Night City’s got to offer from the clues so far. It seems there are six Cyberpunk 2077 districts, and now another of those has been unveiled, via some CDPR concept art.

The dev’s shared some images of Westbrook on Twitter, explaining that the region “is considered by many to be the best place to live and have fun in Night City”, which is certainly clear in the pictures. In one particular shot, we can see a crystal clear water feature surrounded by a semi-landscaped vale peppered with palm trees, and overlooked by an impressive, enormously opulent, waterfall-fronted casino and club.

“If you’ve got eddies,” the post continues, “you come here to spend them. And if you don’t? Well, take out a loan and pretend you’re on top of the world – even for just one glorious night.”

The other pieces present an image of Night City more familiar from much of the footage and artwork we’ve seen so far, with high-rise ‘scrapers, and layers of concrete and neon civilisation – though the pretty scenery does peep through, reminding us it’s the playground for Cyberpunk’s wealthy elites.

Westbrook is considered by many to be the best place to live and have fun in Night City. If you’ve got eddies, you come here to spend them. And if you don't? Well, take out a loan and pretend you’re on top of the world — even for just one glorious night. #ConceptArt pic.twitter.com/gGAnMVMYWL

Westbrook is home to Night City’s Japantown, a cultural epicentre for the Japanese community, as well as a hotspot for the RPG game’s rich and famous.

You can find the new concept images above. If you’re keen to know more about what the game will bring when the (now-delayed) Cyberpunk 2077 release date rolls around in November, check out our Cyberpunk 2077 preview. Our very own Jordan Forward spent four hours delving into Night City, and has “seen things you people wouldn’t believe”.